For Erin and Matt 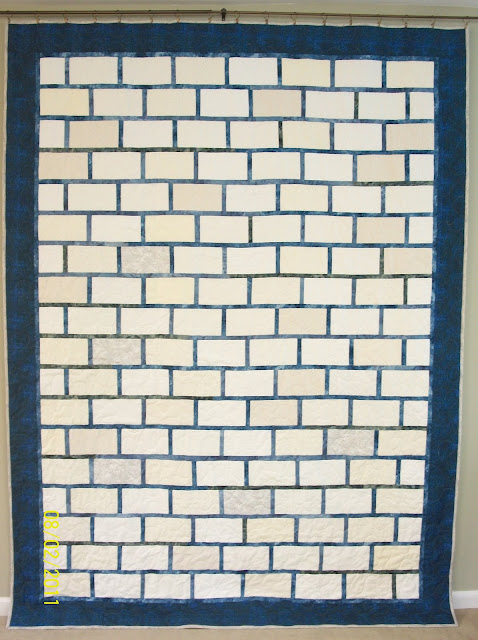 Erin White and Matt Johnson are getting married this Saturday in Mishawaka, Indiana.  Erin's father is my cousin Jerry White

I know two things about Erin - she's an English teacher and she's traditional.  She mentioned that she liked my Aunt Betty's quilts.  One is a quilt with red thread work (which I don't do).  And she also said she liked blues.

Not much to go on.  But here's what I was thinking as I created this quilt.  Matt is a golf course designer.  Erin is traditional.  And I haven't got a clue what their tastes are.  So neutral was the way to go.  This quilt has an architectural feel that Matt may appreciate. 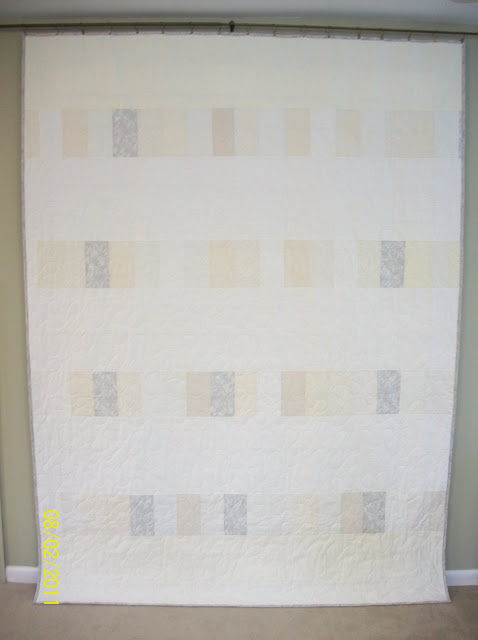 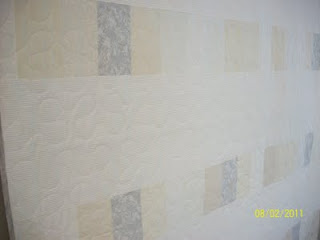 Erin comes from a tradition of quilting.  My grandmother Eloise Sheehan White was a quilter.  So was my aunt Jean White Gill.  My cousin Jerry spent a summer with Aunt Jean in Alaska years ago when she was working on the pipeline.

This quilt has been constructed using all the neutral white, creams, beiges, and greys from my stash with some blue batiks serving at the grout lines.  It has a wonderful scrappy but unified look.  There were "bricks" left over from the front of the quilt, and I used them to make a pieced backing.

My friend Ebony long-armed this using a big loopy stipple - it's a soft look which contrasts with the hard lines of the design.
The bottom picture shows her stitching.

I'm mailing this quilt to the couple - it will be waiting for them in Virginia once their wedding is behind them!

lovely!!! :)
And thanks for reminding me that I should take a trip to Mishawaka soon! :)

It's a lovely quilt. Love the backing too. You have been one busy quilter lately.