My Guest Appearance on the Sew Powerful Podcast 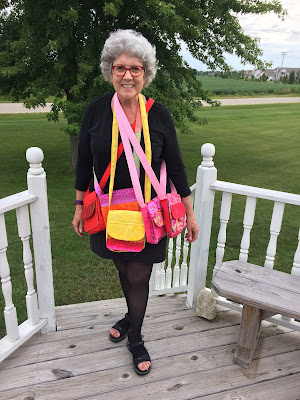 In 2015 I made a couple of Sew Powerful purses.  The mission of resonated with me then and has continued to impress and inspire me.  The Sew Powerful initiative focuses on menstrual hygiene to promote the education of junior high girls in Lusaka, Zambia.  This initiative is community-driven and also features a sewing cooperative, a farming effort, and a soap initiative.

These purses are very specific, and the pattern confused me - and I'm an experienced bag maker!  I made a couple in 2015.  I made some more in 2016.  And then by 2017 I  was cranking these purses out by the batch.  My commitment has grown over the years with both financial support and well as making purses and writing notes that go in each purse.  I think I have made more than 150 but under 200.  Despite the 2020 broken bones, I have done 31 and plan to do another set of 31 in December - a purse a day. 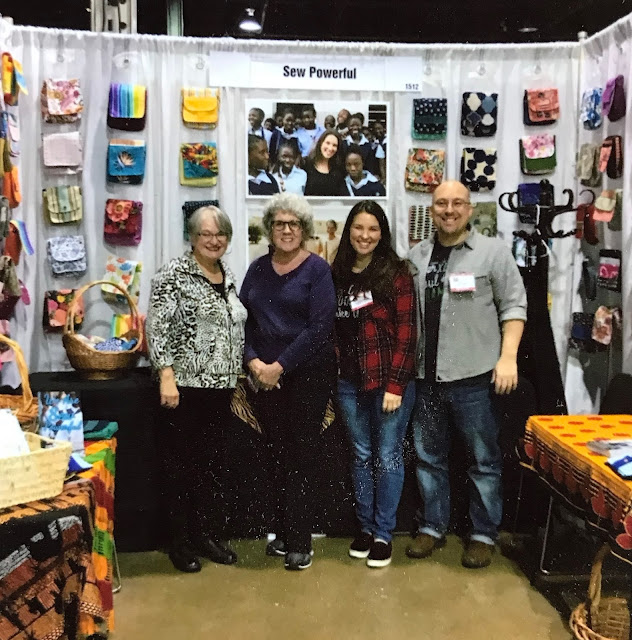 There is a wonderfully supportive Facebook Group of Sew Powerful Purse Makers - Sew Powerful Purse  Project.  This group is international and features so many creative sewists.  We try hard not to compare ourselves to one another. We take turns at being prolific and encouraging.  And get this:  no one mentions politics! 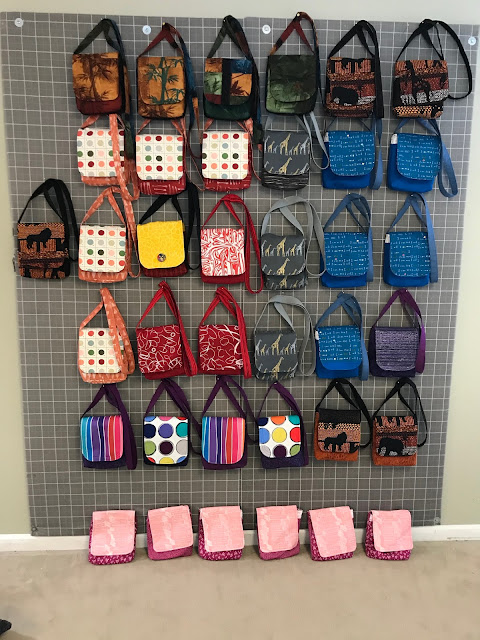 On this Facebook group name recognition happens - I'll see the same names again and again. And we purse makers kind of get to know one another.  This week I was a guest on the Sew Powerful weekly podcast, hosted by Jan Cancila.  The Sew Powerful podcast can be found of almost all podcast platforms.  Each is 30 minutes long and so interesting.  The first three, which were in June 2020, feature Jason and Cinnamon and the short history of Sew Powerful.  Cinnamon is a pattern designer for doll clothes, and the Sew Powerful purse is actually an adaptation of a purse for the American Girl dolls.  These podcasts are a joy to listen to - information, uplifting, and usually tear-jerking.  Jan made the interview process easy, and we discovered so many similarities in our lives - graduated from high school in the same year, went to small colleges, busier in retirement than ever, and utterly devoted to Sew Powerful.
A funny thing happened during my interview with Jan as she focused on other charitable sewing efforts I've been involved in:  it became a history of my involvement with my Chicago Modern Quilt Guilt.  Jan wanted to know about the Mors bags and the Greater Chicago Food Depository, the Road Home quilts, the Teen Living quilts, zippered pouches for Sarah's Inn, and others.  And although I knew this already, it is so obvious that this guild has changed my life and my guild friends are among the most valuable.
The most embarrassing fact revealed in the podcast I did was that I actually took a sewing machine to college with me.  That was the 60's for you!  Sewing is an integral part of my life, and I'm proud of this.

(from the 2nd edition of We Are Soo Powerful)

So Fiddly but Perhaps Worth It

After 34 years of teaching high school English in Chicago Public Schools, I embraced retirement at 55. In these past 15 years, I have been thrilled to describe myself as a quilter. And that is still the title I use to define myself.

But I knew back in 2005 that quilting alone wasn’t going to satisfy me. I needed to find charitable outlets for my sewing. The first project I embraced was Mors bags. These are simple, pretty reusable fabric grocery bags. Give people a Mors Bag and ask them to use it instead of accepting a plastic bag from the store. Pretty soon everyone in my family, all of my friends, my doctors, and their staffs, and even random strangers had at least one Mors bag.

Every year my guild, The Chicago Modern Quilt Guild, has a designated charity— Mors bags for the Chicago Greater Food Depository, quilts for the children of homeless women through Project NightNight, toiletry bags for victims of domestic violence through Sarah’s Home, quilts for teens graduating from foster care to independent living through Teen Living, quilts for veterans through the Road Home Project. Each project is so satisfying. Clarissa Pinkola Estes, an honored poet from Ohio, has said:

Ours is not the task of fixing the entire world all at once, but of stretching out to mend the part of the world that is within our reach.

Sew Powerful, through Jason and Cinnamon Miles, has made the girls in the Ngombe compound in Lusaka, Zambia, within my reach. I first learned about Sew Powerful through my quilter buddy Wayne, the same guy who started me in on Mors bags. Wayne learned of Sew Powerful and decided he didn’t want to do it but perhaps I might. Why, yes, I was highly interested and had flashbacks to my early teenage years and coping with “womanhood.” I vividly remembered the horrors of trying to get through a school day in a large high school without a visible accident. And this is a first-world country! My heart aches for those who cannot maintain normalcy during menstruation.

I made my first Sew Powerful purse in late 2015 and whined about every single step. I concluded it might just be easier to send money to Sew Powerful. But I stuck with it and did nine by the February 2016 deadline. And then? Hmm, I just took a break. What ended my break was a Facebook sew-a-long hosted by Louise Ambrosi from the UK in the summer of 2016. Since then, I have been cranking out purses, doing what I can when I can, and sharing the Sew Powerful mission.

We live in such uneasy and violent times, and I have never been more politically distressed. My solace is my faith and my sewing. This is a perfect time for me to be working on purses for Sew Powerful. We all sleep under the same stars.

On Its Way to Oregon 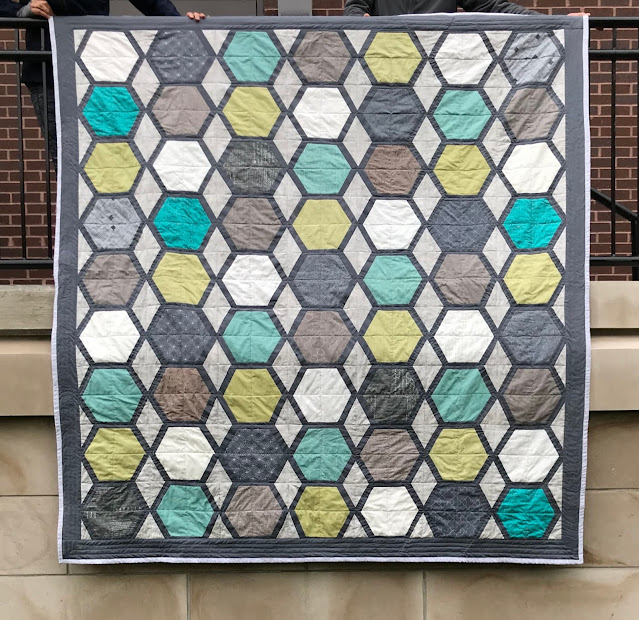 Look how nicely this quilt turned out!  Quilty Eileen made a quilt from this pattern years ago - it's a clever way to make hexies without using Y seams.  I had a Layer Cake of the Moda Thrive fabrics and think it creates a pretty palette.  I didn't have quite enough but was able to fill with with fabrics from my stash.  As I made this quilt top, I loved it.  But then I fell out of love.  You know, one of those "Somebody's gonna love this quilt - it just won't be me." 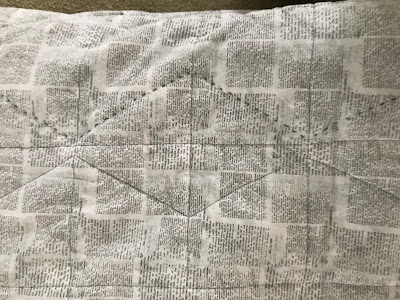 Because I no longer loved the quilt top, I wasn't going to bat it with wool. I used the Warm and Natural batting, perfectly fine - its just heavy.  I even tried to hand quilt it - after one vertical zig zag row I knew that was wrong.  So then I tried to machine-quilt the zig zag lines. Again, wrong.  So I just put it away.

Fellow guild mate Susan Elster-Jones knows people in Oregon who lost everything in the September fires and put out a call for quilts.  And I volunteered this one.  Just simple straight-line quilting.  And check out the backing - I love it. 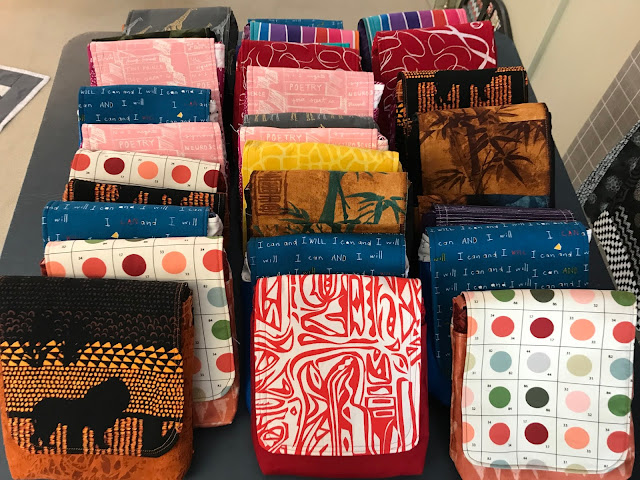 That Susan is collecting and shipping quilts is so fabulous. I'm happy that this quilt will find an appreciative home.  Between finishing this quilt and shipping off 32 purses to Sew Powerful, I feel like I've removed two monkeys from my back.  On to a few more masks and then ? - see the previous post!
Posted by Donna at 1:41 PM No comments: