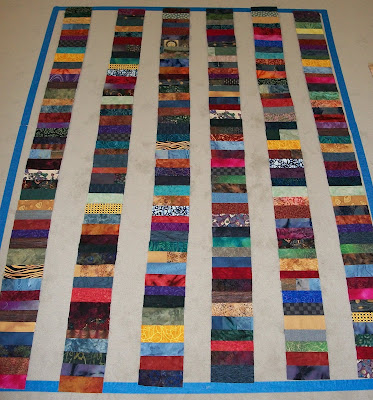 It seems like I just blogged about this, but - again - my scrap basket overflows. So it's time for another scrap quilt. This time I found strips of fabrics and cut them into 6" lengths. There are 6 vertical strips, each 60" long. I thought I'd set these strips on muslin or something light. But the Thursday night girls suggested black or something dark. And I began to see all the browns in my stash. The result of these 2 "audition" photos is that I like the darker brown background so much more than the lighter brown or neutral background.

Let's see. Do I know anyone using browns as a decor theme? Hmmm, nephew Chris Thompson. He's just moved, his life is a bit unorganized at this point. This scrap quilt will be perfect for him. 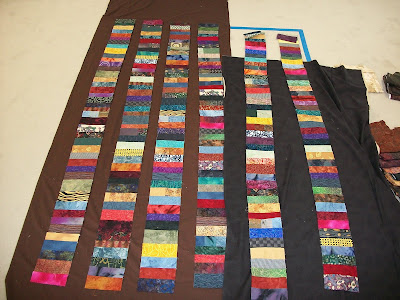 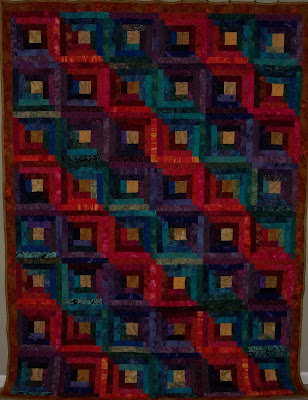 Poets use words to express their emotion. Quilters use fabric, color, and design. Returning home from India, my head was full of colors - the colors we saw in the flowers, the saris, the landscape, the food. As I was assembling fabrics I wanted to use, I knew that gold had to be at the heart of this design. And I had some smaller pieces that just needed to be used. So I went to one of my favorite blocks, the log cabin. This quilt is the result.

Originally I was going to keep this quilt and back it with a piece of stamped fabric I got in Jaipur. But as I was assembling the 48 blocks of this quilt, Jeff Cylkowski made a visit to my studio. He was a child when we lived next door to his family in the mid-1980'a, and was a 3rd grader when his mom Linda died. Jeff went to high school in Pennsylvania and Indiana and then went to the West Coast to skateboard and breakdance. He also began doing graffiti. With the realization that he needed to formalize his art education, he moved to the East Coast and got a BFA from Pratt Institute in Brooklyn and has been doing interesting things ever since. He is spending this summer in Philadelphia where he wrote a grant for the Asian Arts Initiative and curating a multi-media arts exhibit.

I am used to people liking my work, but Jeff saw this quilt and used his art vocabulary about this quilt - depth, opticality, movement, impressionism. At his sister Michelle's wedding in 2006 Jeff and I talked about exchanging art. Since then I have made his sister not only a wedding quilt but recently a quilt for her baby Camille. So Jeff has been on my list. And now I knew what to make for him - something similar to this quilt.

And that's when things began to take shape. Not only did this quilt not belong in my house, there was no way I could duplicate this quilt, partly because of the emotion that went into this but also because I used up the end bits of several terrific fabircs. This quilt became Jeff's quilt.

It's finished and ready to ship to Jeff when he returns to Brooklyn. It contains not only some of the emotions from when I returned from India, it also holds memories of Jeff's childhood and his family.

Paper or Plastic? Neither! 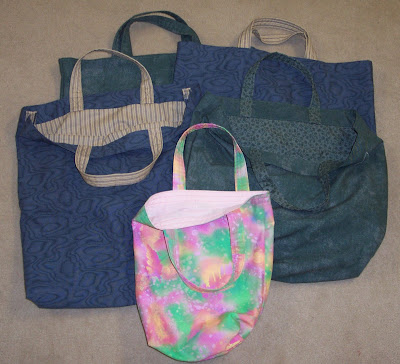 Instead of the offered laptop bag, Mani (Dodie's older daughter) requested shopping bags. She and Tyler have 3 children - Will, Charlie, Meritt - and are excellent parents who model what they want from their children. Weekly shopping bags must be strong enough to carry cans and a gallon of milk and big enough to carry an 8-pack of toilet paper. They must be washable because you know that something is going to leak. These are basic MORS bags with a boxed corner.

My goal: bags attractive enough for Mani to use but also manly enough that Tyler will want to use these. Ideally, everyone in the family will have their own shopping bag, including 3-year-old Meritt. Just as we have used our bags for over 10 years, I hope these bags will see the Reed family through at least the next 10 years.
Posted by Donna at 8:00 AM No comments:

For Patricia and Byron 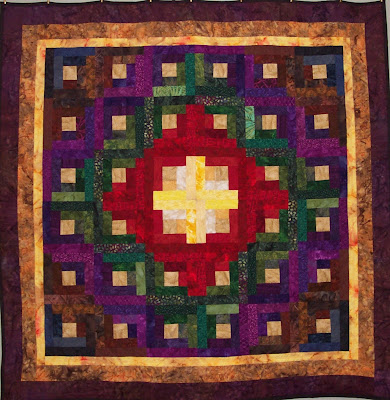 Patricia Dieball and Byron Sigcho are getting married this Saturday, August 8, 2009. Actually, they are already married and having a Convalidation Mass. Patricia's father taught with both John and me at Farragut a lifetime ago, and so we have known Patti ever since she was born. It's very exciting to see people find their life partners, and we're thrilled for them both.

In choosing this wedding wall hanging, Patricia and Byron wanted a blending of a traditional American quilt pattern blended with the colors of Latin America - Byron is from Ecuador. This log cabin is a symmetrical design and forms a cross in the middle, something they have chosen. It's very much the Ojo de Dios (God's eye) design from yarn weaving.

We are looking forward to Saturday's activities and wish them a lifetime of happiness. 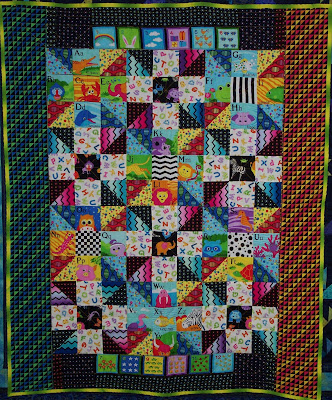 Cecilia's daughter Dr. Megan is having her second child this month. This new baby will be a girl despite 2-year-old Sean's prediction of a little boy. Megan told me I could do whatever quilt I wanted for this new baby, and that stymied me. So I asked Cecilia to go shopping with me. She found this "Baby Genius" kit and then funded this project.

Click on the picture to see some of the details. There are both alphabet and number blocks. Sean will have a great time using this quilt to instruct his new little sibling. Stay tuned for birth details!

Niece Laura had Baby Elle Monday morning - Daddy Jim and sisters Amelia and Olive are all fine. Elle was a week overdue - Mommy Laura is a zillion times happier now. 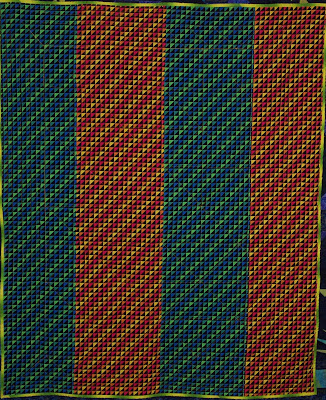 Update:Sean's little sister Julia Rose was born Friday, August 21. Grandparents are doing well and busy falling in love all over again with Julia.
Posted by Donna at 8:03 AM No comments: