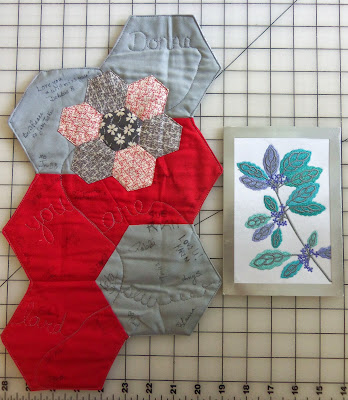 So many friends have sent such lovely cards and notes to me, each one very special. But these two are extraordinary. My cousin Barbara Long Bailey found this embroidery that was made into a card. And my quilty guild buddies made this hexie rug in my favorite colors. Not only did my quilt besties sign it, one of them (Holly? Sarah E?) free-motioned quilted "Donna, you are sew loved." Deep pieceful thanks.
Posted by Donna at 1:06 PM 3 comments:

A Pause in Life's Rhythm 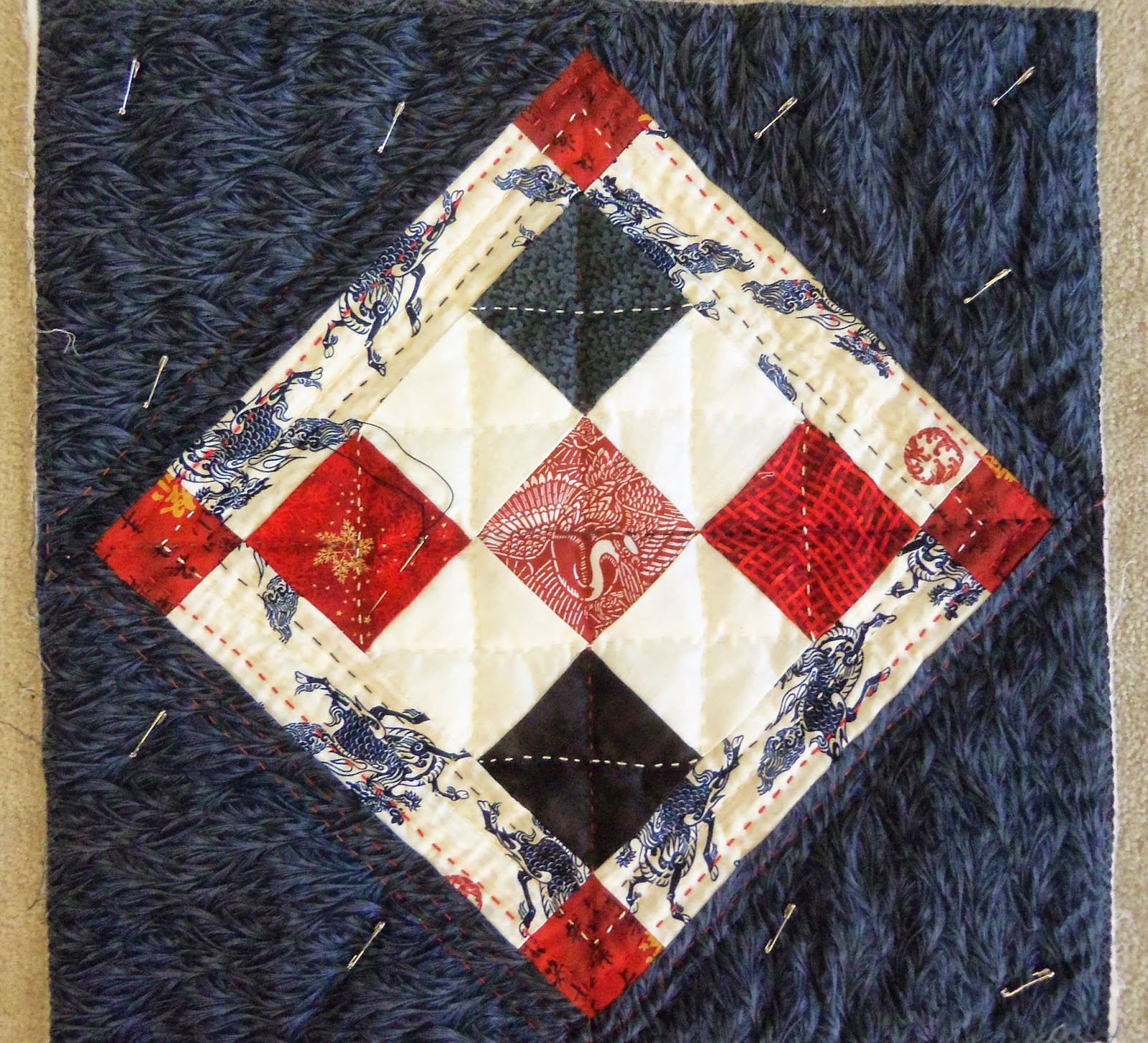 July has been a difficult month. My father received at-home hospice services and died in my brother's Lombard house peacefully on July 13th, just three days after his 66th wedding anniversary. My brother and sister-in-law were with him - so was my mom. My minister brother did a wonderful memorial service on the 19th. Dad played to his final packed house that day. And we are all at peace. This blog started in 2007 with the death of my college roommate and dear friend Dodie.  And now this is another life's milestone.  And of course my sewing has been impacted.  My quilting adventures of late have been "by hand" since I have spent so little time in the studio. This block is a sample from the quilt pictured below.  I made 48 nine-patches by hand and sashed them with a wonderful fabric my guild buddy Mimi gave me.  The quilt assembly was completed just as my dad went into hospice (is anyone else thinking "The Last Leaf" by O Henry?).    Mimi does handwork and turned me on to quilter Renate Hiller and her philosophy on handwork.  So this quilt - 68" x 86" - will be quilted by hand. 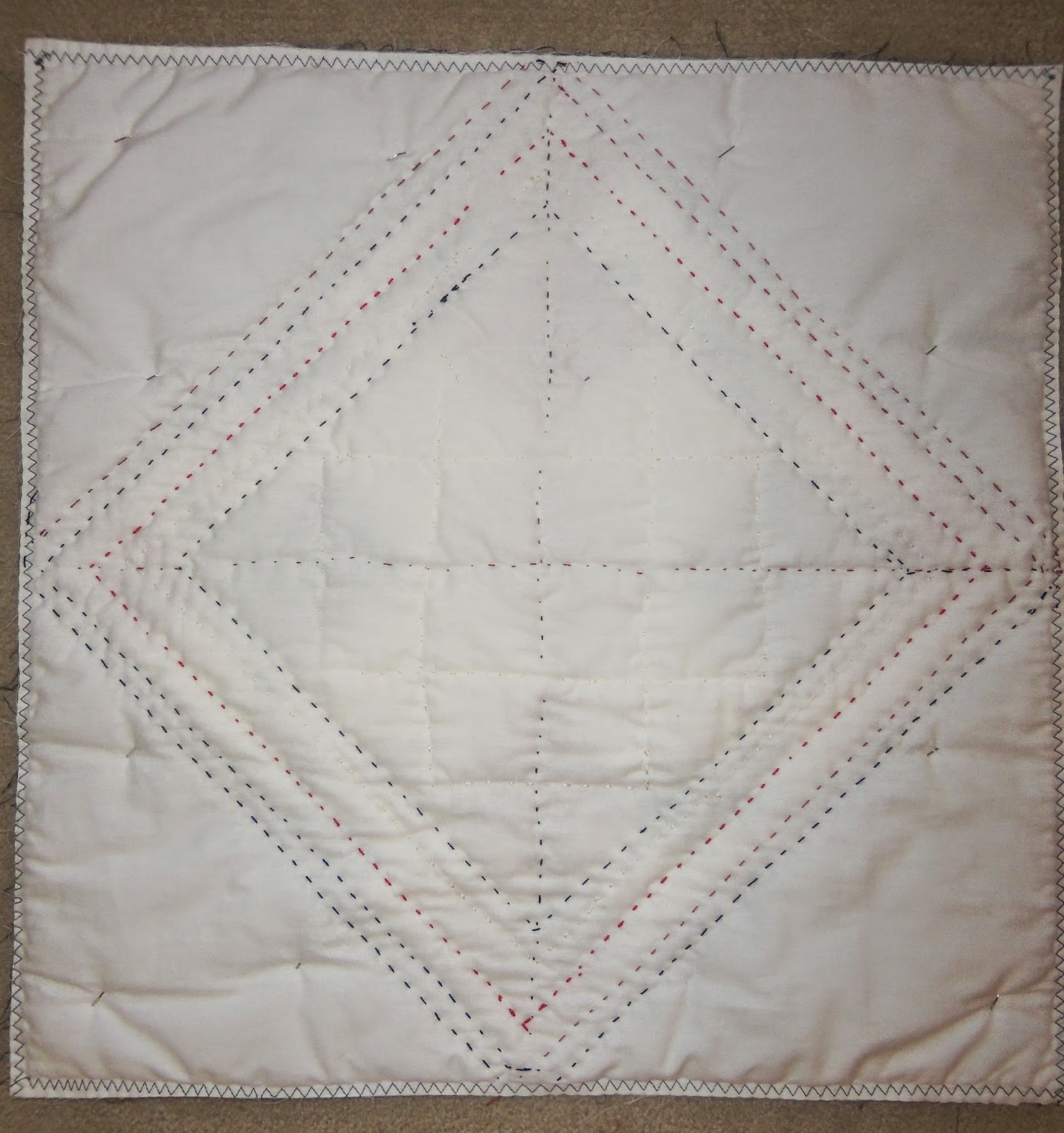 Even I know enough by now to do a bit a practice before starting anything.  And I am intrigued by the application of Japanese Sashiko to quilting.  So much so that I am taking a class about this topic in Austin next February at QuiltCon 2015.  So I made a 49th block, batted and backed it, and am experimenting with thread and embroidery needles.  I like the primitive look of my stitches.  The batting for the sample and big quilt is wool (which I love), so there will be a wonderful lofty and airy look to this quilt.  The white thread blends in the best, but I do love how the red and black thread look.  This sampler will allow me to figure out what is best for this big quilt. 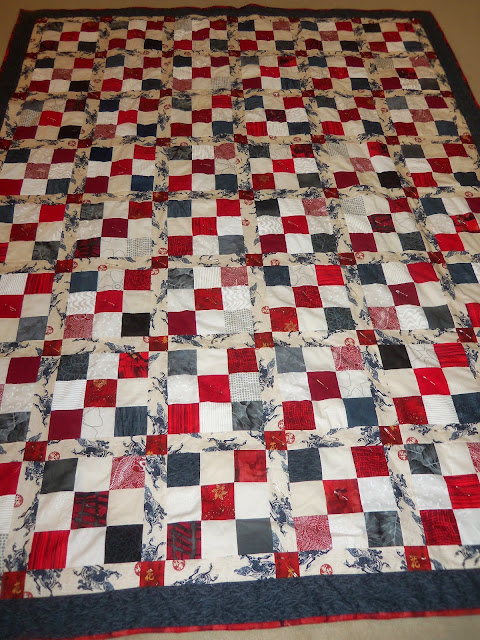 People do goofy things under duress. One of my many in the past few weeks was to decide I needed to make clothes. Chicago fabric designer Sara Lawson put out a new line of quilting fabrics, two of which have been issued in a knit. I fell in love with this one and bought three yards. So I spent time with pattern books and bought several patterns, which you'll see strewn about in the pictures below.  So what did I think?  that I would whip up an outfit for my father's funeral? 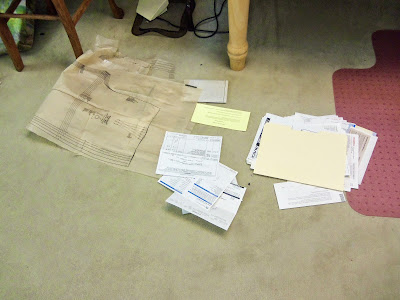 But I also did some sane things in the past month, like continuing to walk daily. My respect for my Lombard brother Doug and his wife Kim has increased, if that's possible. My brother Al made my father's funeral an absolute celebration, and of course my husband John has kept the house going so I can do what I do. The administrative wrapping up with take another couple of weeks, but it's all sort of under control. (One little coincidence: I turn 65 in October and am filing for Medicare benefits through John - CPS does not pay into SSA. So while I was at the offices last week, I was also able to report my father's death. Tomorrow I have to go back with additional documentation for both me and transfer my father's benefits to my mom. I am taking with me their original marriage license from July 10, 1948.) If I could just say the same about the studio... 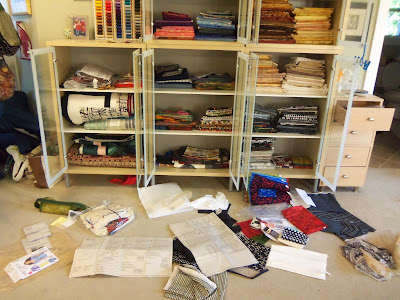 My dad was a remarkable man, something I lost sight of in the past few years. His funeral celebrated the impact he had on so many. I look at my life - my education, my intellectual curiosity, my humor, my creativity - and know that he and Mom are at the source of this all. I am looking forward to reestablishing some sort of rhythm in my studio and continuing my quilting adventures, being so at peace.
Posted by Donna at 8:40 AM 3 comments: