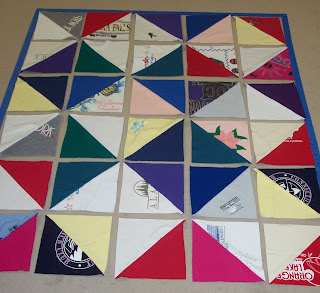 It's so hard to get back into the swing of things after being out of town. One project that's ready to sew together is a quilt of big half-square triangles, and there's a second one in the making. Both of these are from the shirts of Corinne's mother, and these quilts are for Corinne and her sister. I'll get this off the design floor today and then begin laying out the hockey jerseys. 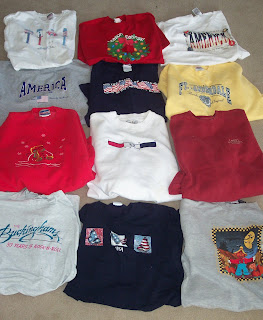 Another quilt from shirts is for Bridgett Toma - she wants this for her aunt as well as two baby quilts out of the leftovers. Here's a tentative layout of the shirts. 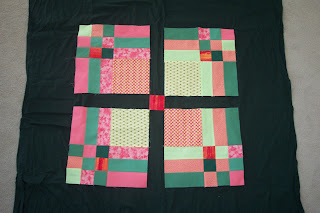 Niece Molly has chosen fabrics for her bed quilt. I'm struggling with the design. Here's something very tentative.

Ok, get busy, Quilter Girl! No more delay tactics.
Posted by Donna at 1:52 PM No comments:

The Dardenelles with Pearl and Varsha 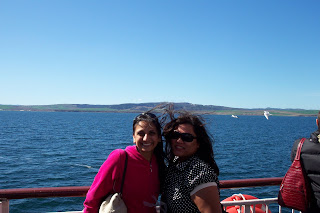 Ok, ok, - I know this isn't about quilting. We met these darling young women on the bus from the Istanbul Airport to our Oran Hotel. Even though they weren't on our tour bus, we had several opportunities to run into Pearl (right) and Varsha during our two-week visit. The second day of our trip we drove west out of Istanbul along the Marmara Sea towards Gallipoli and used a ferry to cross the Dardanelles to get to the mainland, the Asian part of Turkey. Behind the girls is the European part of the country. We always meet the nicest people on our travels! (One fascinating fact I learned on the trip was the connection between the words Gallipoli and Portugal. At one point both ends of the Mediterranean were controlled by the Gauls, as these names indicate!)
Posted by Donna at 7:41 AM 2 comments: 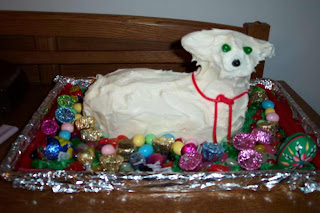 No quilting for me today and tomorrow. We came back from our 2-week Turkey trip, and my jet-lagged brain is still in Istanbul with some of the lovely people we traveled with. We are especially missing our guide Orhan. Our immersion into Turkish culture was wonderful, and we were sorry to see the trip come to an end. But now it's time for my yearly Easter tribute to John's mom. She baked lamb cakes for her grandchildren and passed on her recipe and one of her lamb pans to me. So now I bake lamb cakes for the grandchildren - we'll deliver the kits tomorrow. Along with the lamb cake is vanilla frosting, coconut dyed green, some jelly beans for the eyes and nose, and - as you can see - we haven't found a good way to do the mouth. This tradition is a wonderful way to remember Sophie Moscinski.
Posted by Donna at 8:24 AM No comments: 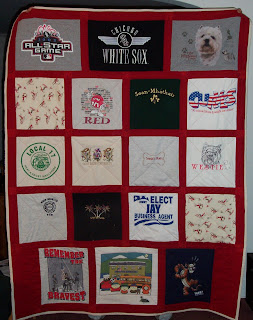 off to Turkey we go! John and I have done some remarkable things in the past three years - our Central Europe trip, the cruise around the Horn of South America, the week in Beijing. Now we're flying to Istanbul and touring the western half of the country, including Ankara, Konya, Izmir, Ephesus, and Canakkale. I've already outlined the work to be done once I return home. The Hockey Jersey Quilt for Michelle's son and 2 memorial quilts for Corinne from some of her mom's shirts are at the top of the list. Niece Molly's quilt is also ready to start - I have all the fabrics but haven't decided upon a design. And today Bridgett Toma dropped off some shirts of her mother's - she wants a quilt for her aunt.

Bridgett and her sister Sheila were the first ones I ever did memorial quilts for. Pictured here is Sheila's quilt. Sheila is a teacher at Kennedy, and her mother who was younger than me died quite suddenly in the fall of 2004. Sheila gave me their mother's t-shirts and sweatshirts to be made into quilts. Along with all the shirts was a bag of flannel pj bottoms. At the time Bridgett was pregnant with her first child, so I made two baby quilts from the shirts and flannel bottoms.

Sheila had no idea the path her quilt request would lead me on. Since then I have done over a dozen "memorial" quilts . I think the deaths of my cousin Jim White, Joe Keeley, Fred Snively, my uncle Leonard White, Dodie Wallace. And I marvel at how therapeutic quilting has been for me.

So we're off to Turkey. Perhaps I'll find some inspiration for future projects! Be back March 20, just in time for the World Figure Skating telecasts! What a geek - quilting and skating... 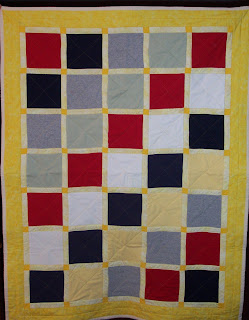 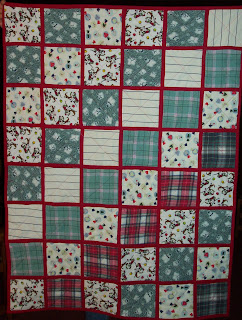