Five Pretty Purses, all in a row... 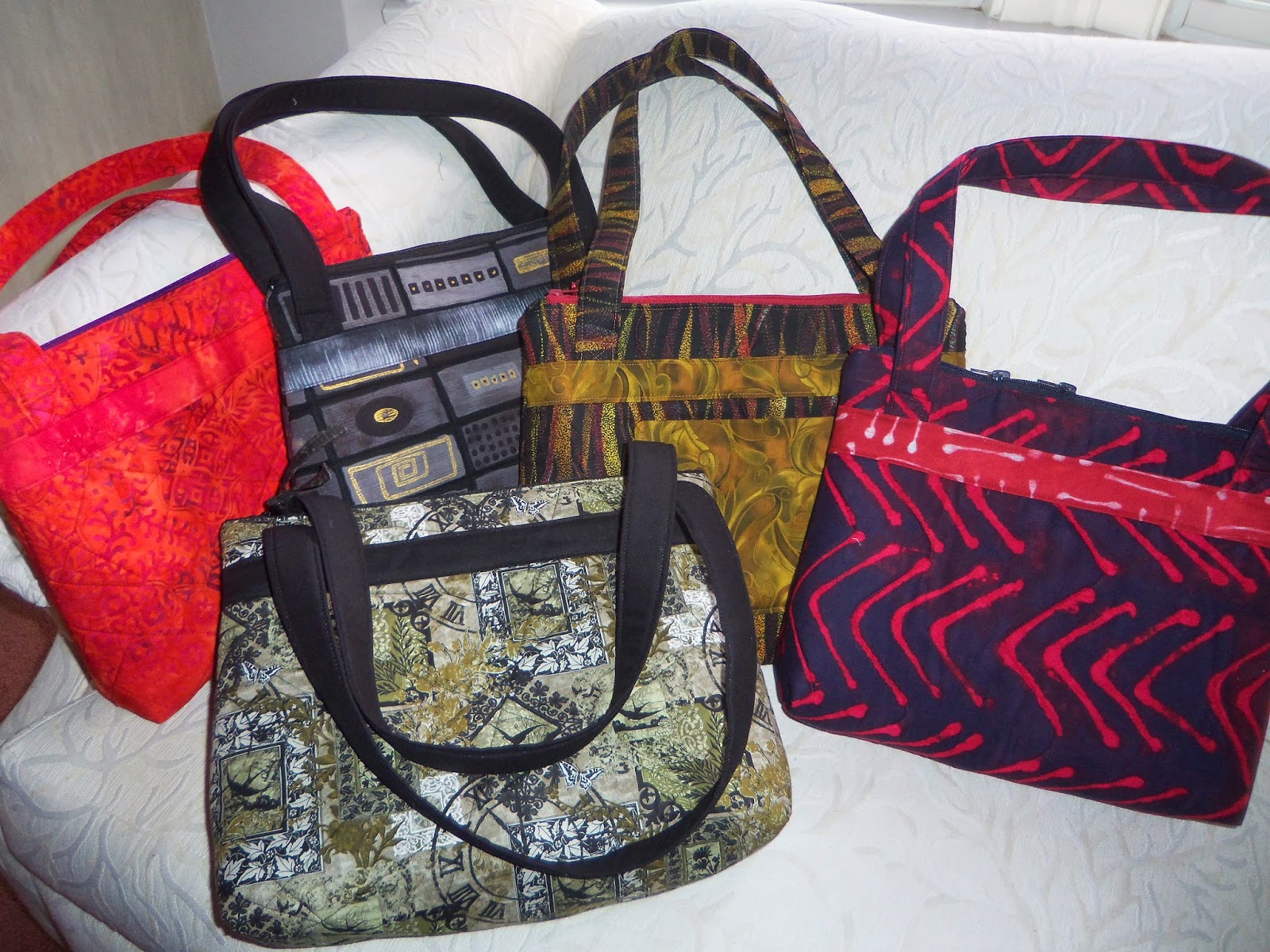 Five bags are completed.  And one more is in process.  I never played with dolls when I was little.  Guess I'm making up for it now by playing with purses... 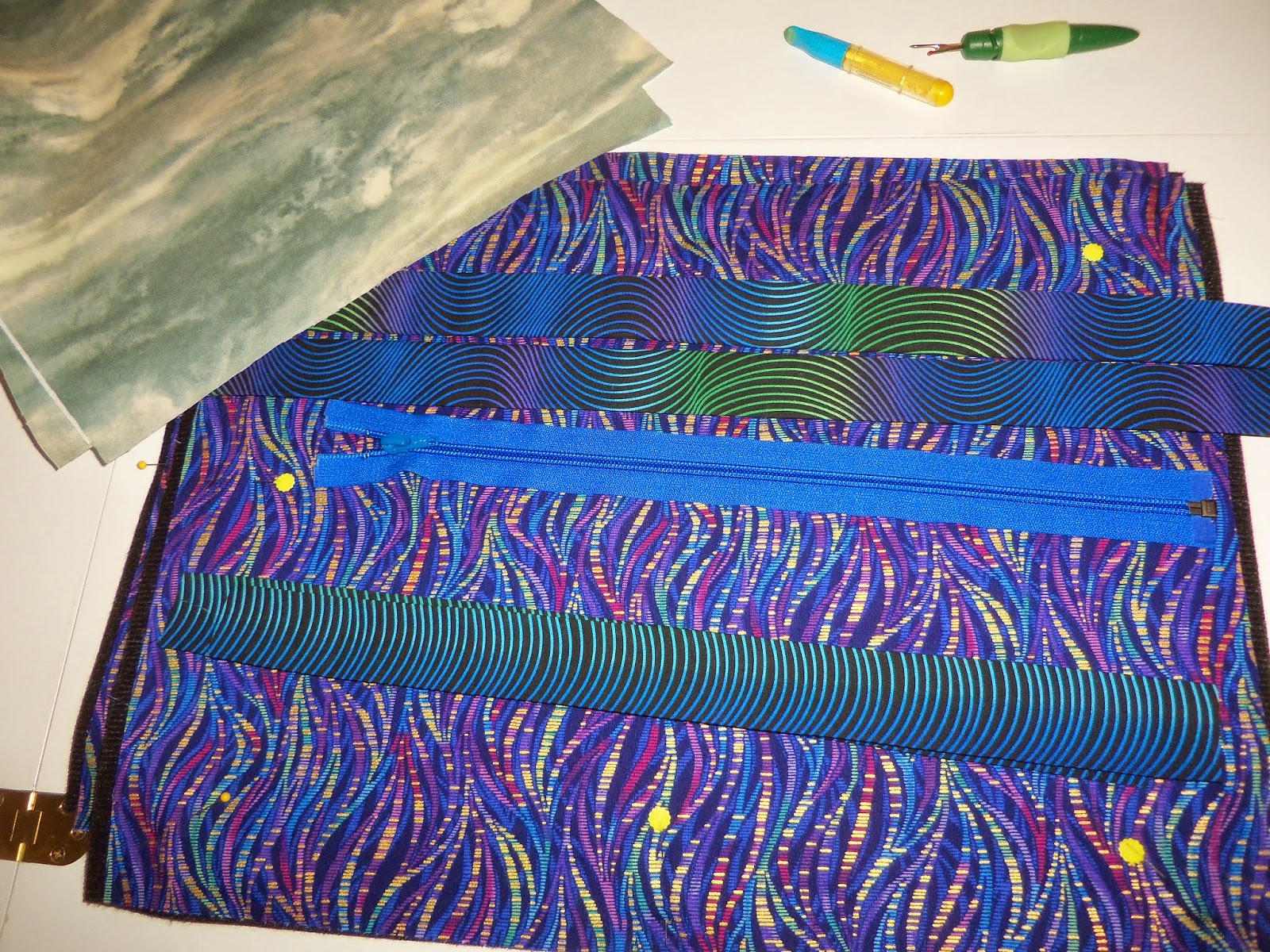 An Arabesque Sort of Week 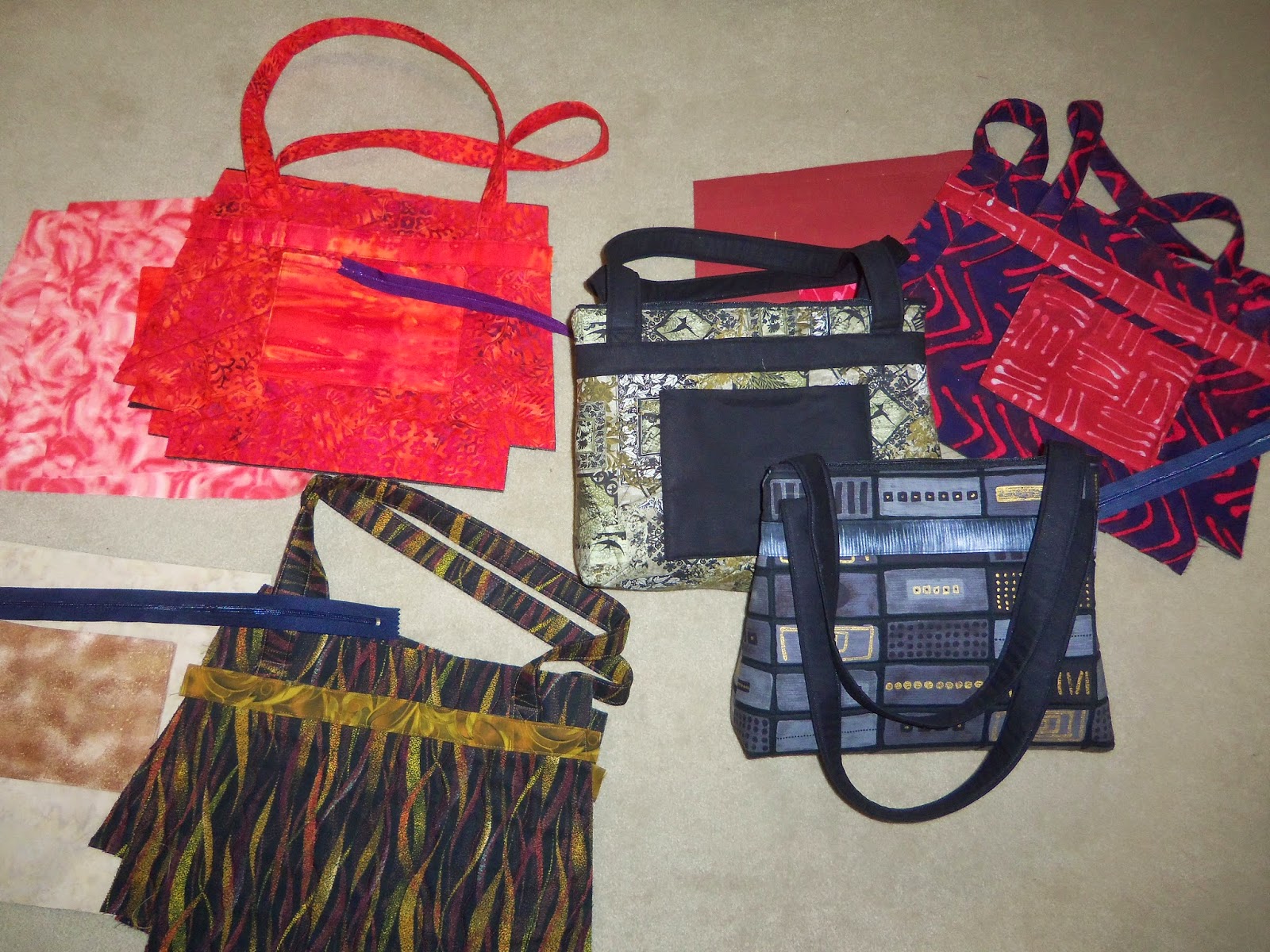 I have been in the mood to work on a purse, an Arabesque by Sara Lawson at Sew Sweetness.  The one Arabesque that I have loved and (gently) used I would up selling to someone for a Christmas gift.  It was a twin of the grey tiled bag above.  My neighbor Miguel is visiting family in Uruguay next month and asked for a bag for his mother.  Then, he realized his sister would probably take that bag from his mom so he decided to get one for his sister.  But he has another sister, too.  So he wants three of these bags.  This week was the prepping - cutting the linings, assembling the interior pockets, adding an exterior pocket to this wonderful pattern (which is a free download), quilting the body onto Soft and Stable, a foam interfacing, making the straps.  Two are complete, and the other three are almost there.  A most satisfying week of sewing.  Now Miguel can choose which three bags he wants.  Although if he does choose the black/grey tile, I am charging more for that one!
Posted by Donna at 8:47 AM No comments: 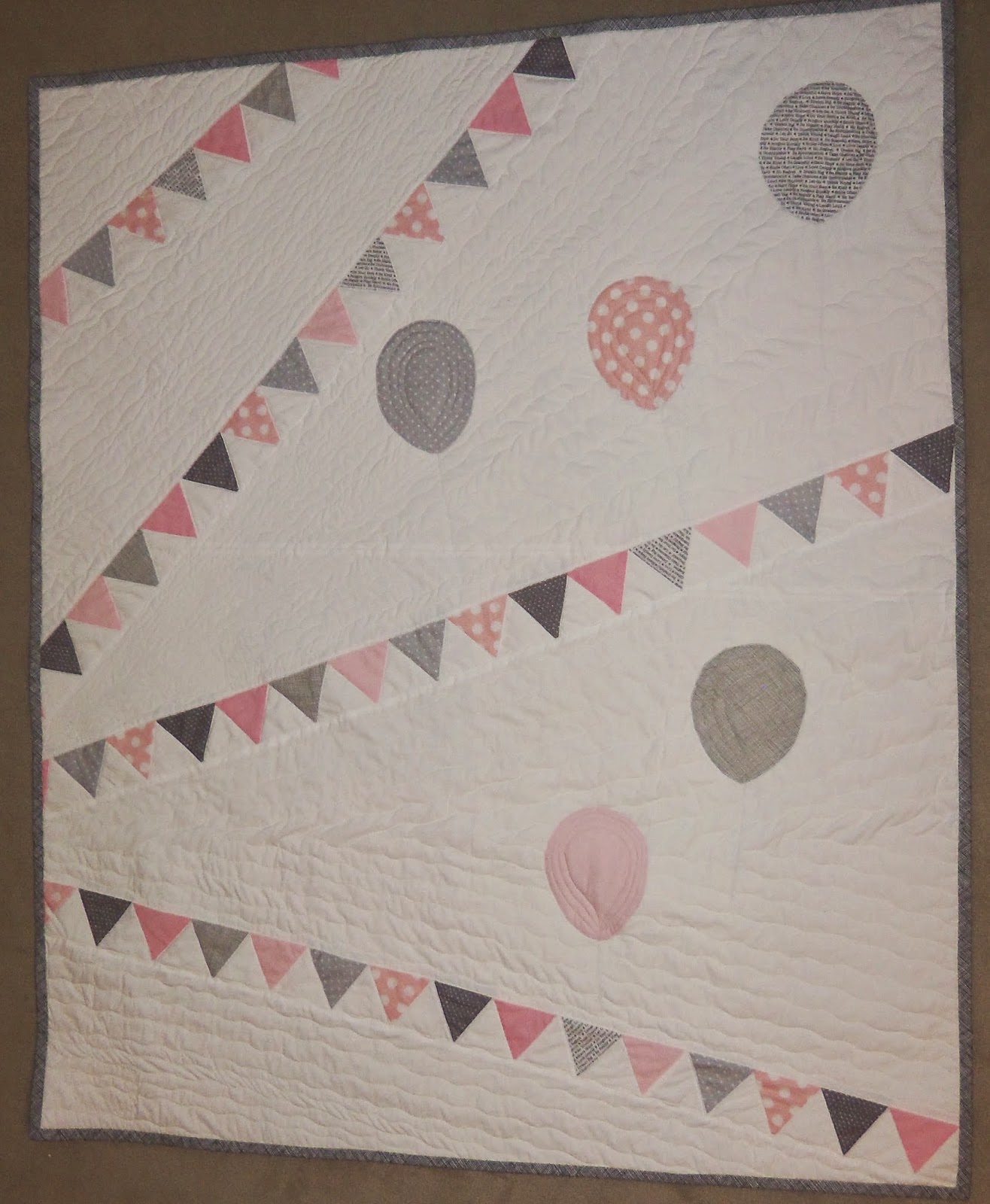 My niece had her second child, little Eloise Emma, Friday.  Eloise was born in Brooklyn and will join her brother Henry, mother Jen and father Tim.   ***cue The Circle of Life  from Lion King***  Eloise was the name of my Grandmother White, nee Eloise Sheehan.  People die, babies are born, and we remember those who came before us. 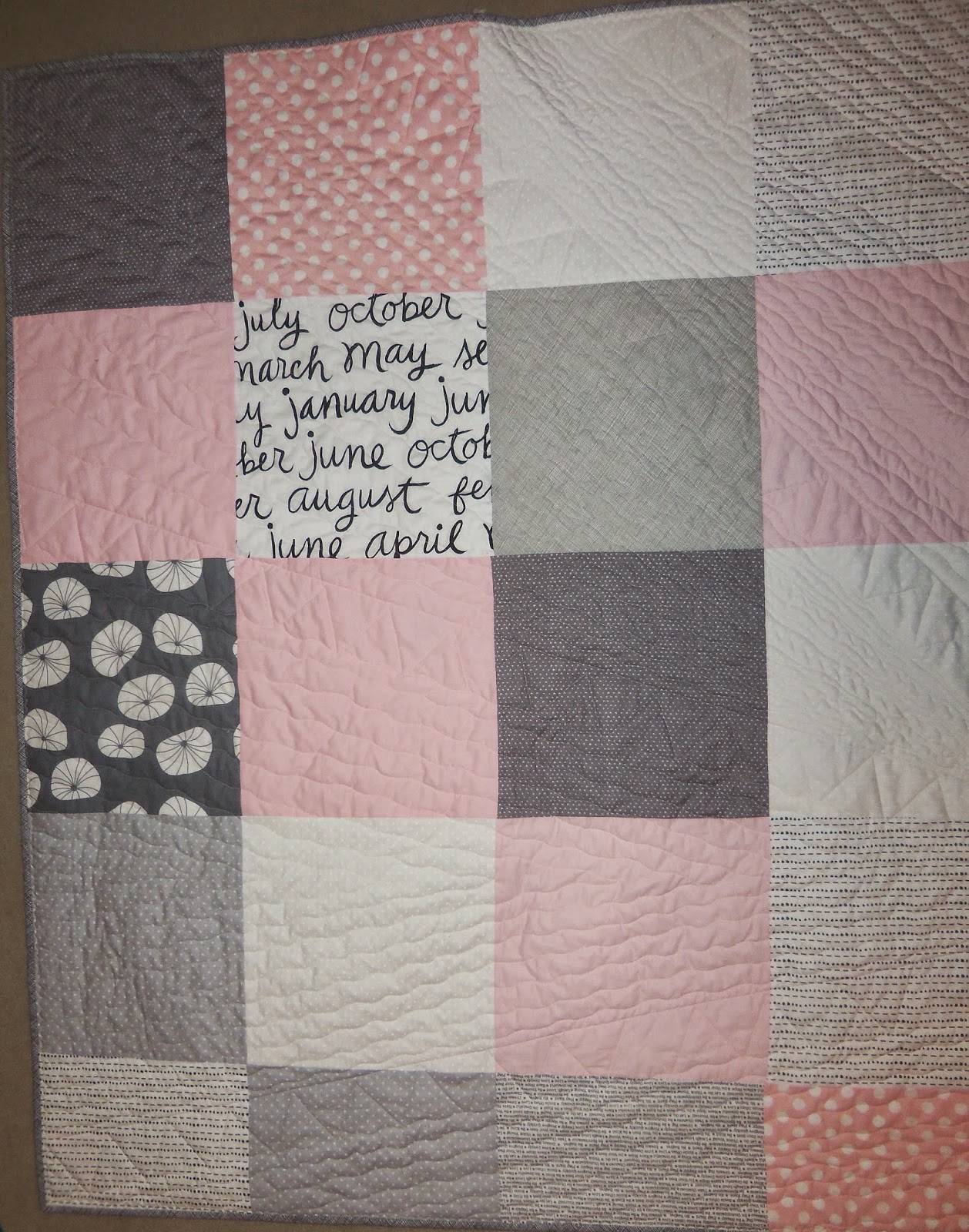 My niece requested a low-volume pink and grey baby quilt.  The magazine Quilty published a baby quilt, full of lines of pennants.  I adapted this idea for Eloise's quilt.  I know my niece loves balloons, and I think this quilt looks complete with the addition of the balloons.  See the picture at the end of this post for the quilt top without balloons.  The quilt's back is a bit higher-volume than the front and a great contrast. 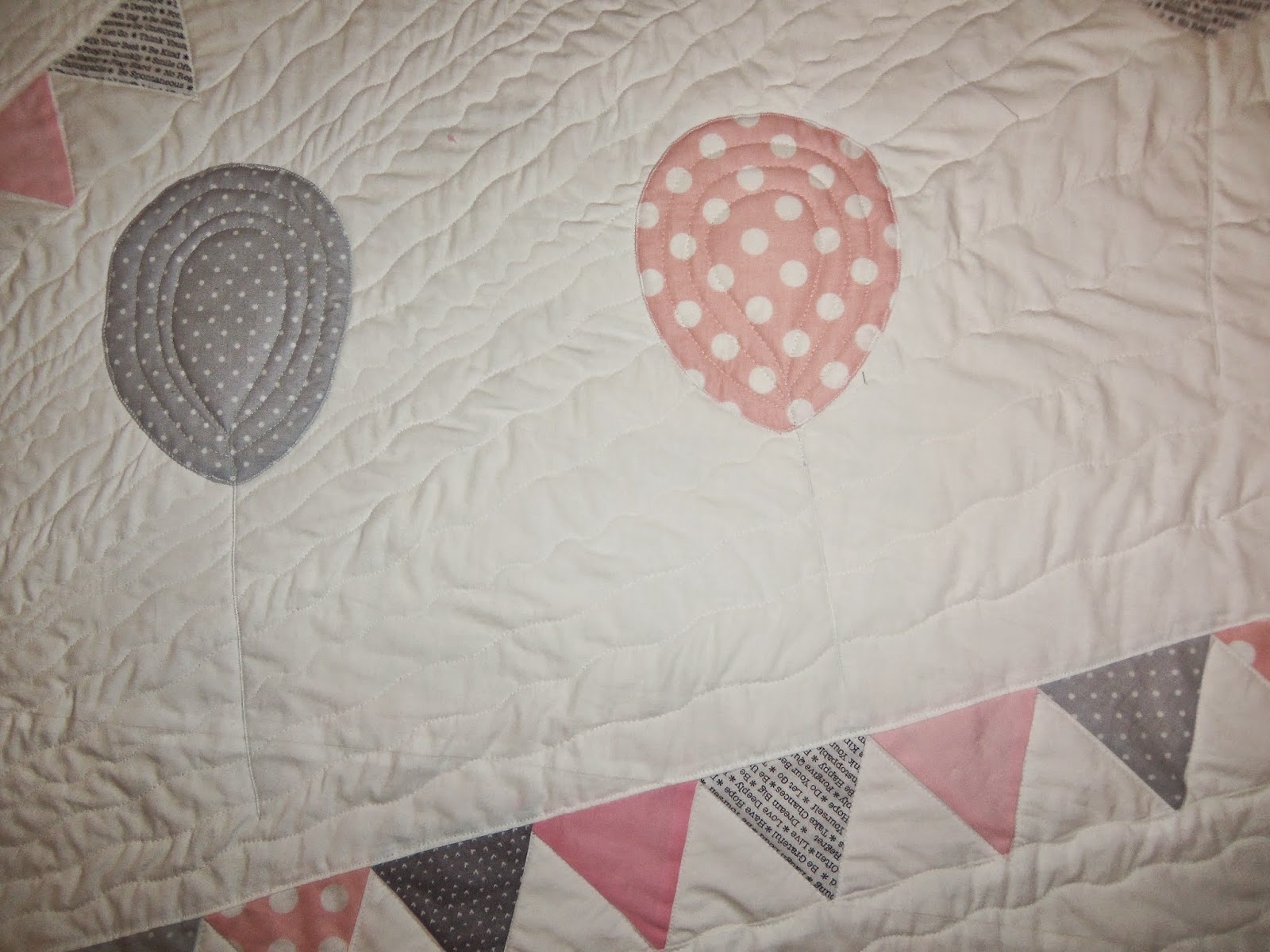 Eloise's quilt is in the washer right now and will go in the mail Monday!  What a satisfying project. 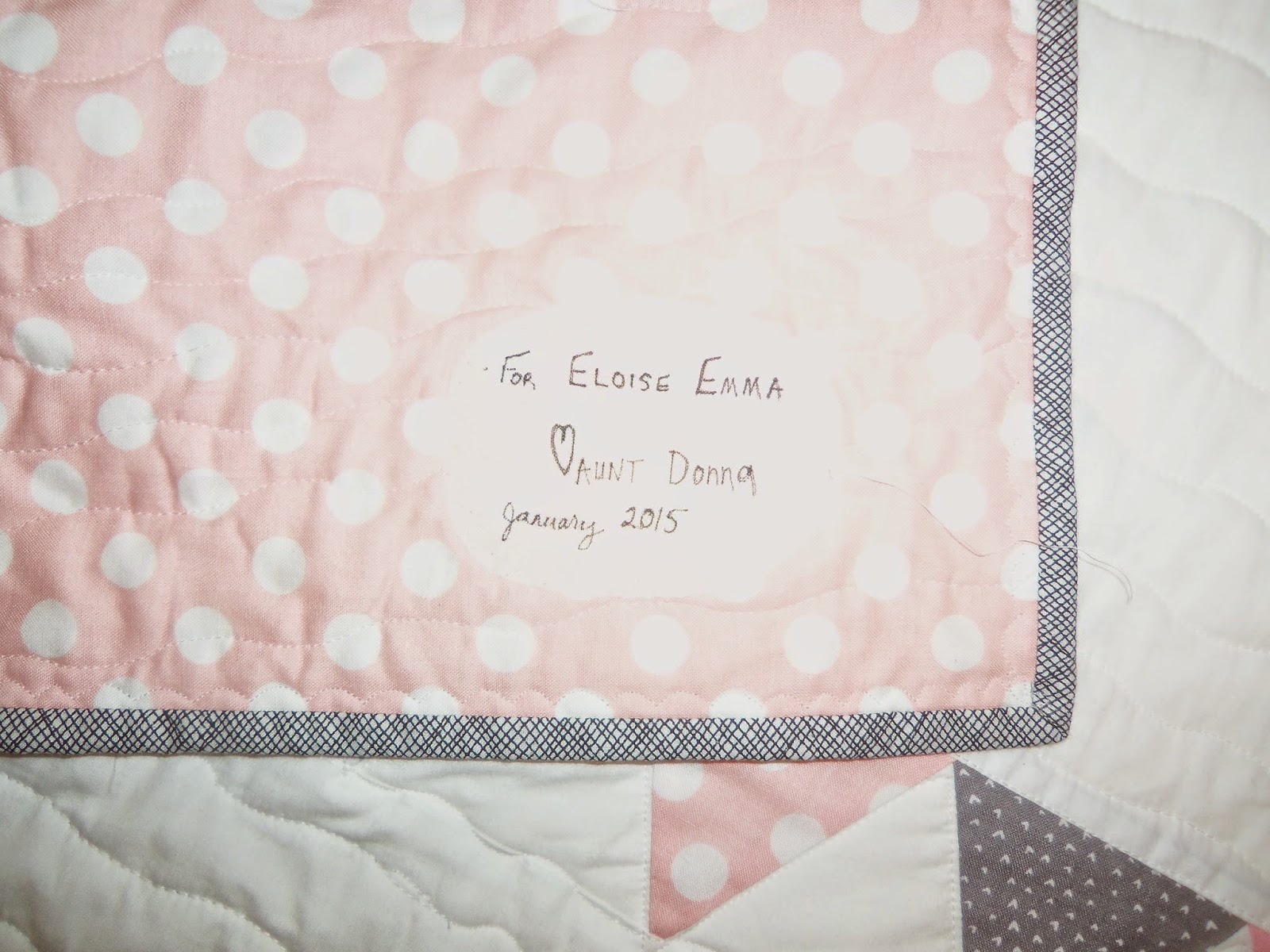 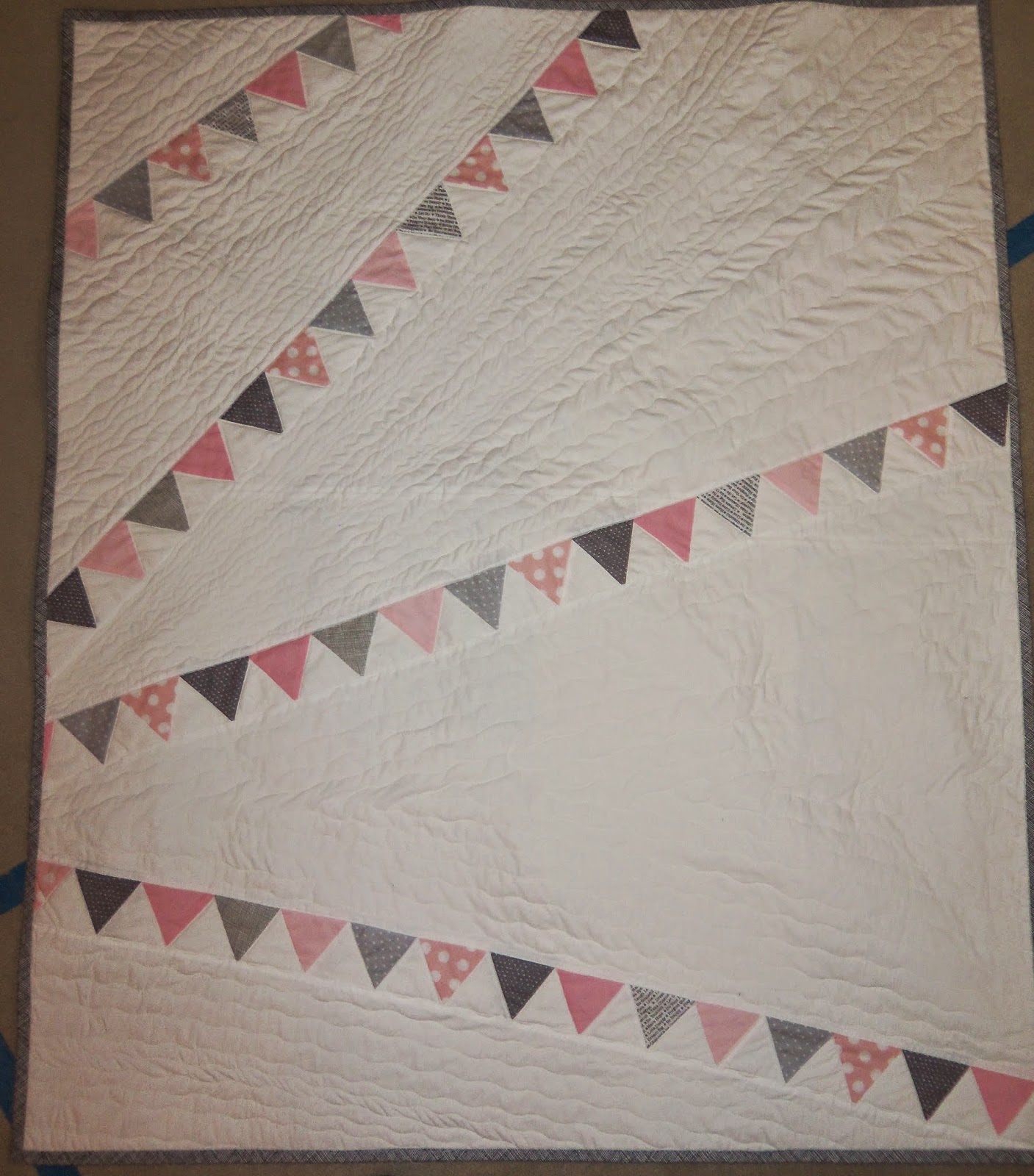 Victorian Shadowbox: Ready for the next 25 years! 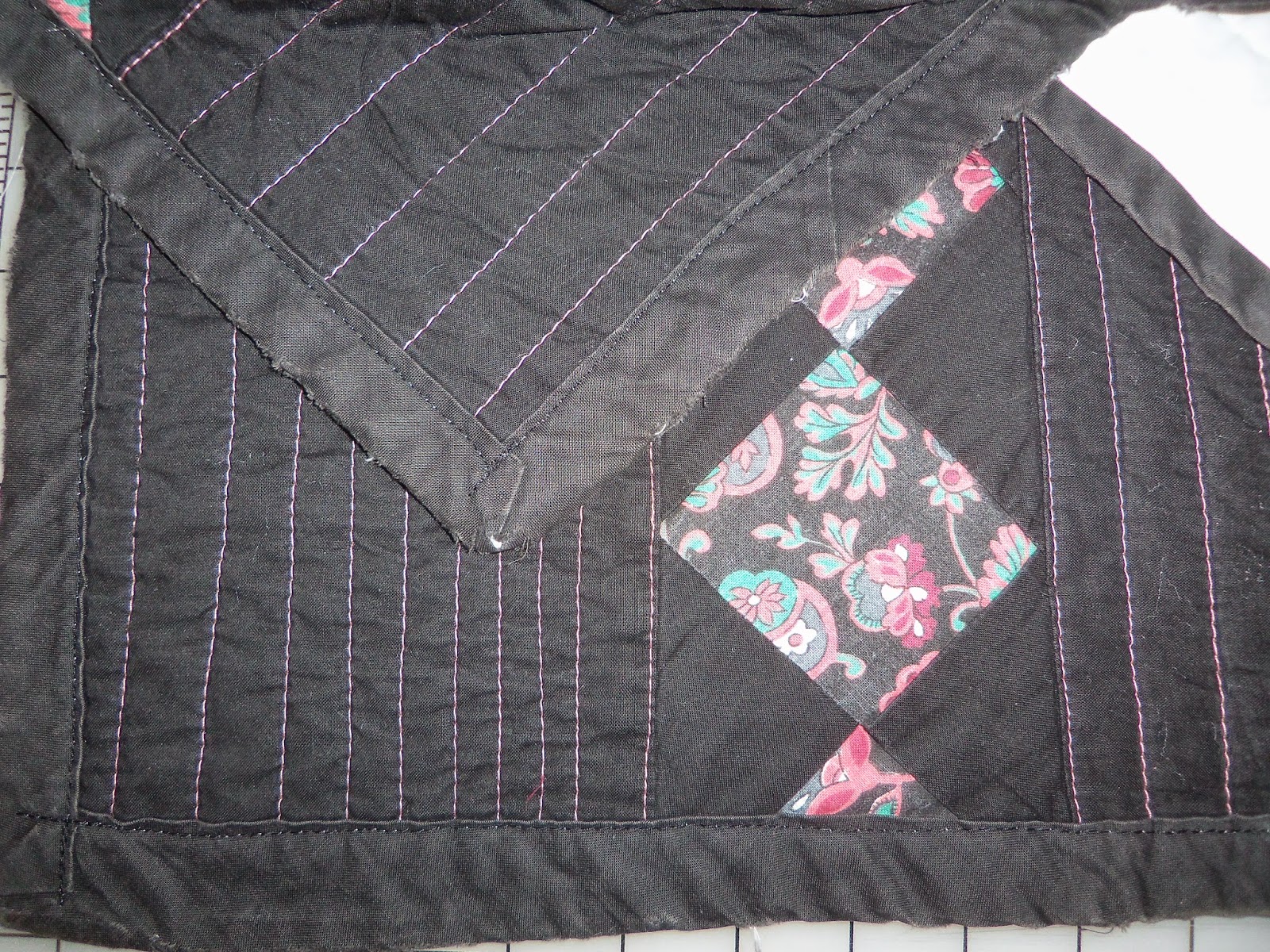 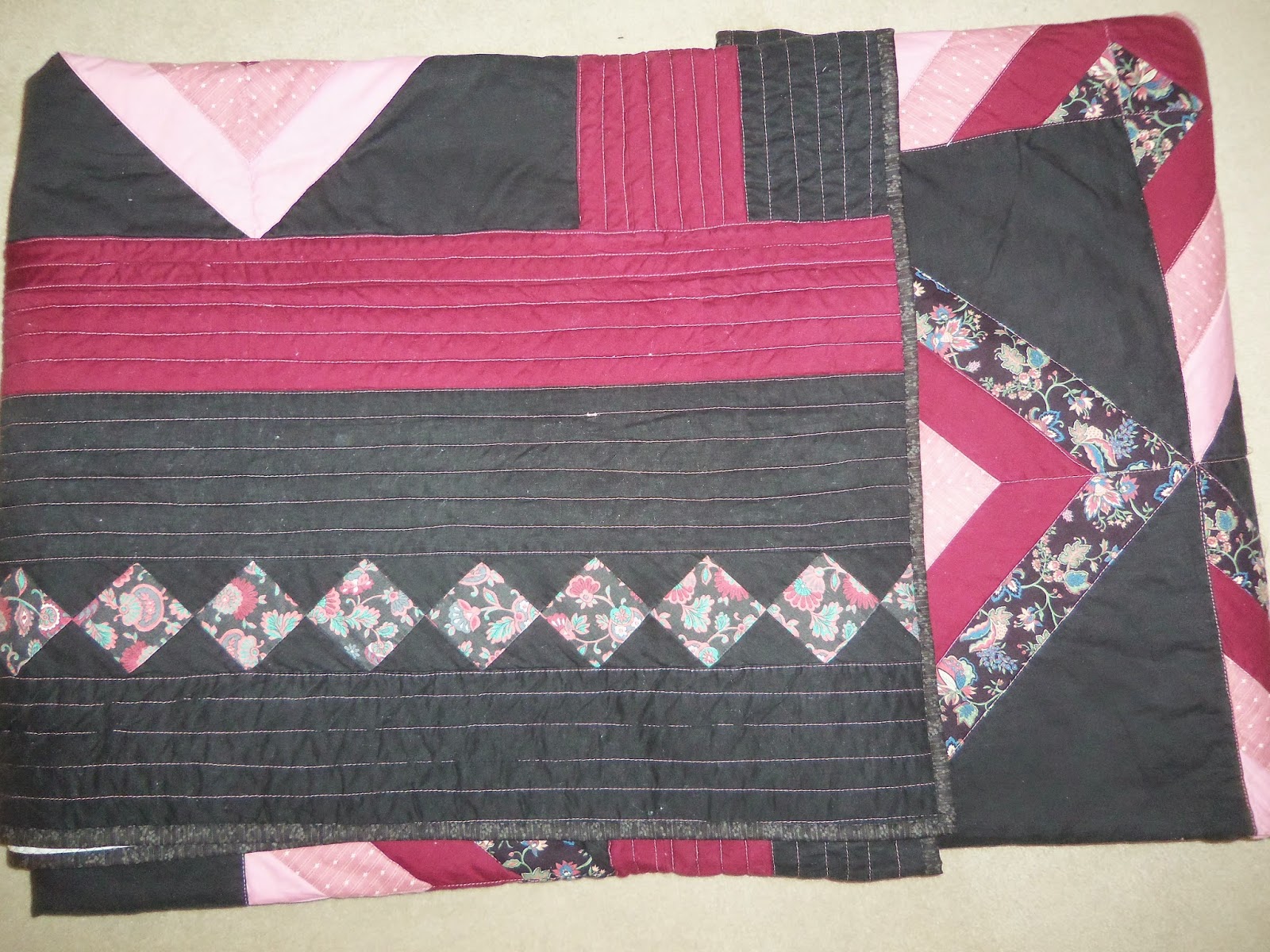 When students are learning English as a Second Language, they are classified as ELL's - emerging language learners. This quilt I made when I was an EQM - an emerging quilt maker.  My primitve basting method means there are nice big folds in the backing.  My straight-line quilting isn't so straight.  The binding was pretty horrible - I didn't even know how to miter corners! And let's not even talk about the quilting in the quilt.  I did this on a domestic machine with a small harp, and this quilt is 84" x 104". 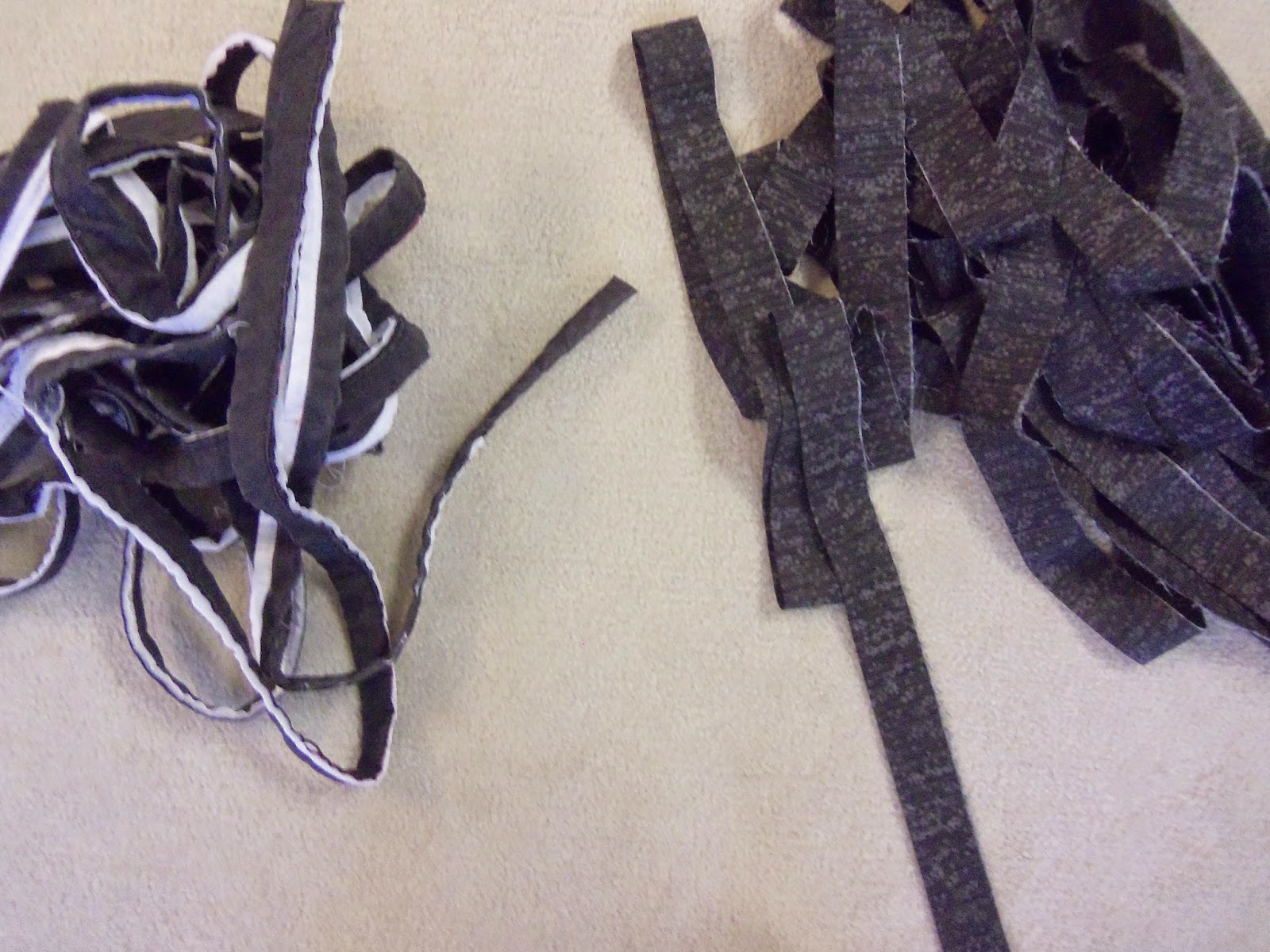 With the old binding cut off and the new binding security attached, this quilt has a primitive beautify and softness and is good to go for another 25 years.  Quilters give quilts away.  So it's great to be able to have my hands on something I made and see how it's lasted.  This quilt will be very happy in its St. Joe, Michigan, home with my sister.

Victorian Shadowbox for the Aged P's 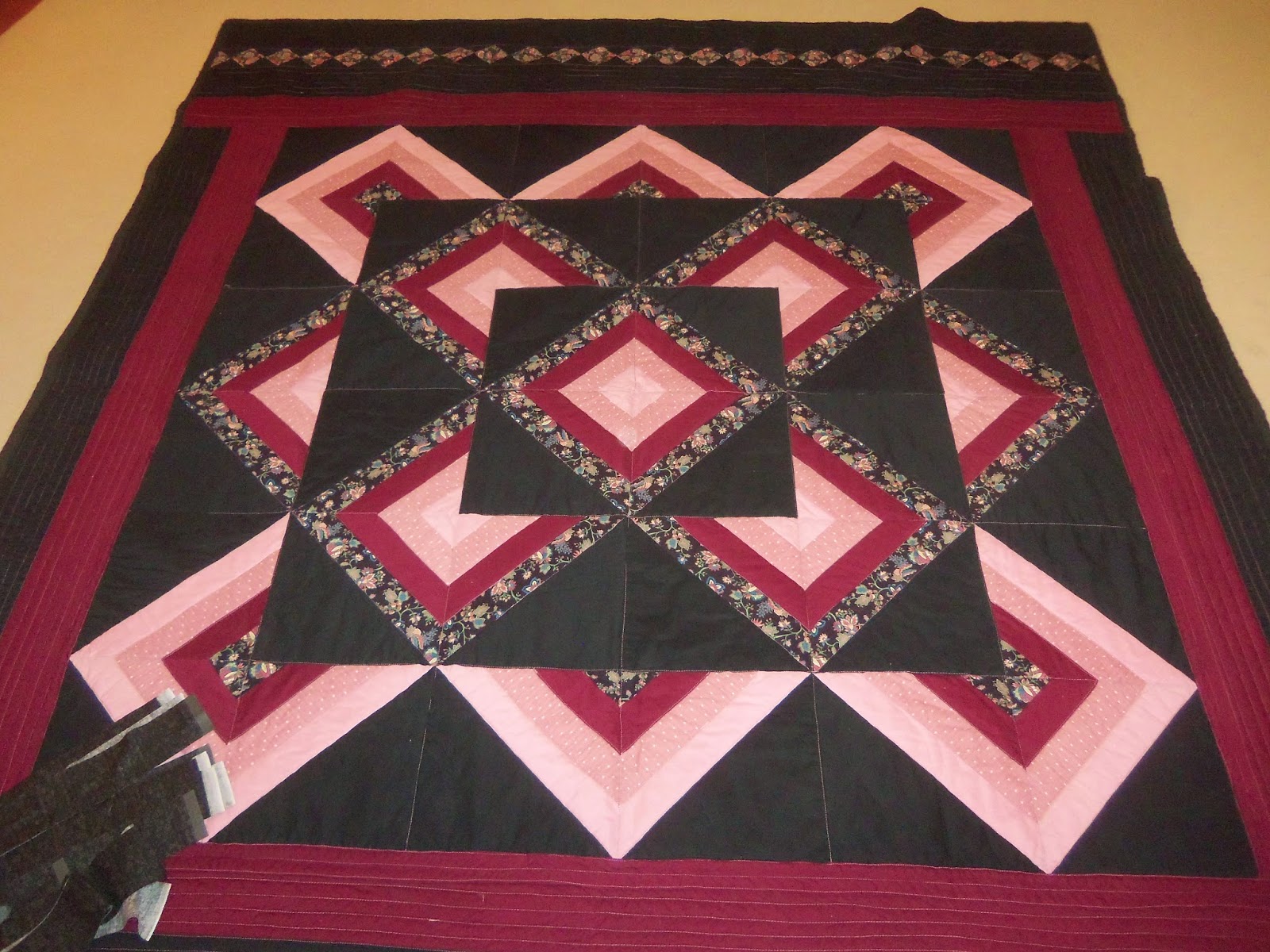 When I was a novice quilter, back in the late 80's, I depended on television to learn.  Eleanor Burns's TV show was excellent for this, and to this day I recommend Quilt In A Day books and patterns to beginners.  She did a Roman Stripe quilt, and I decided to make it.  I am not sure what drove the color choices, but my mom really liked this when it was almost finished.  Except she and my father had just bought a long bed.  So I had to figure how to add borders to a finished quilt.  The other television show I watched was Simply Quilts with Alex Anderson. On one of her shows she demonstrated seminole piecing, which appears in both the upper and lower borders. 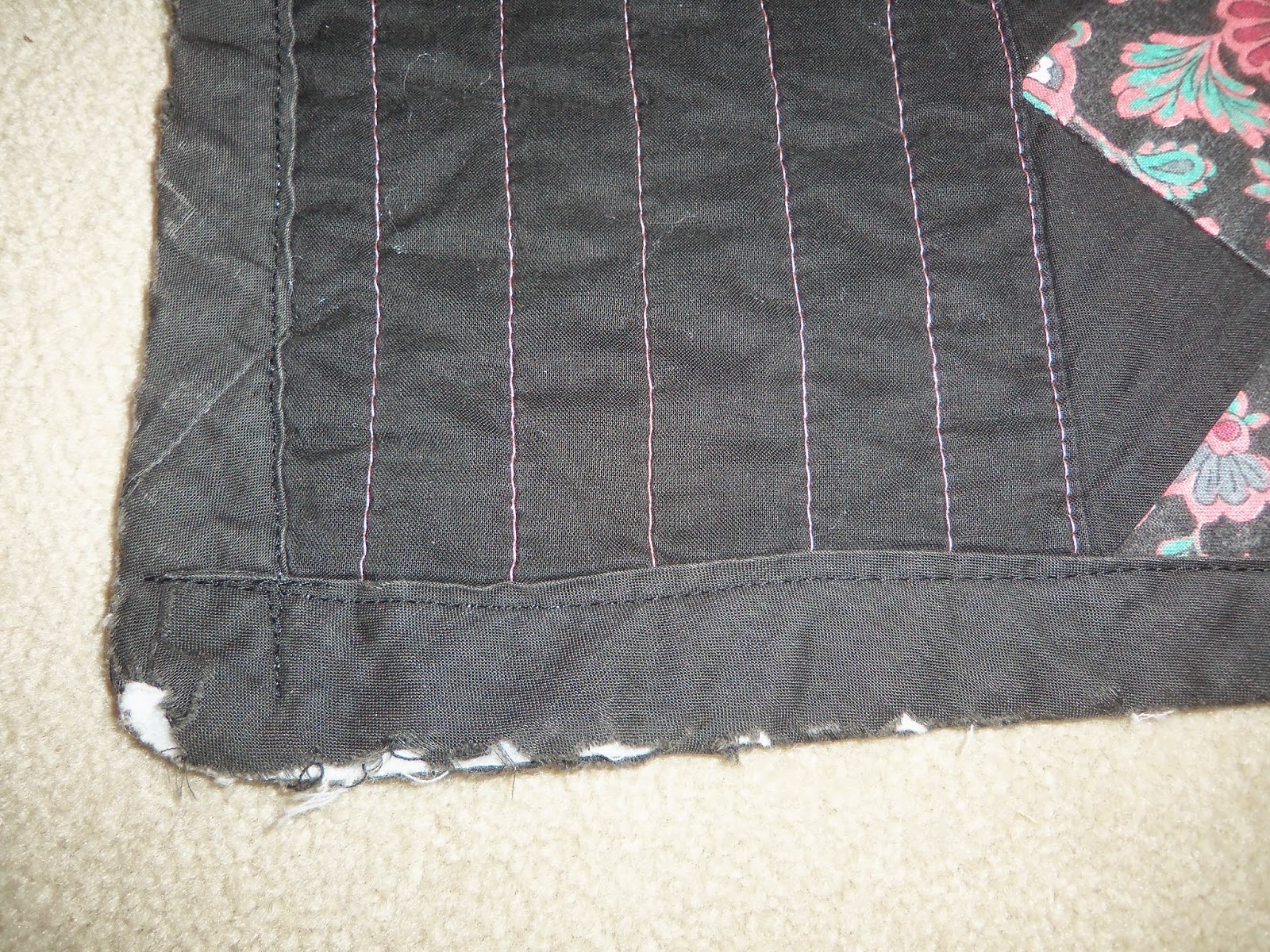 My sister-in-law Kim returned this quilt to me after my mom died.  My sister Paula chimed in and said she would like it - she has a pinkish guest bedroom and is trying to minimize the pink.  But I couldn't let her take the quilt just yet.  I made this quilt in 1991, waaaaay before I knew how to do a lot of things properly.  Most of the quilt is in good shape (except for the early primitive straight-line channel quilting).  But not the borders.  They are badly frayed because I didn't understand the importance of double-fold binding. 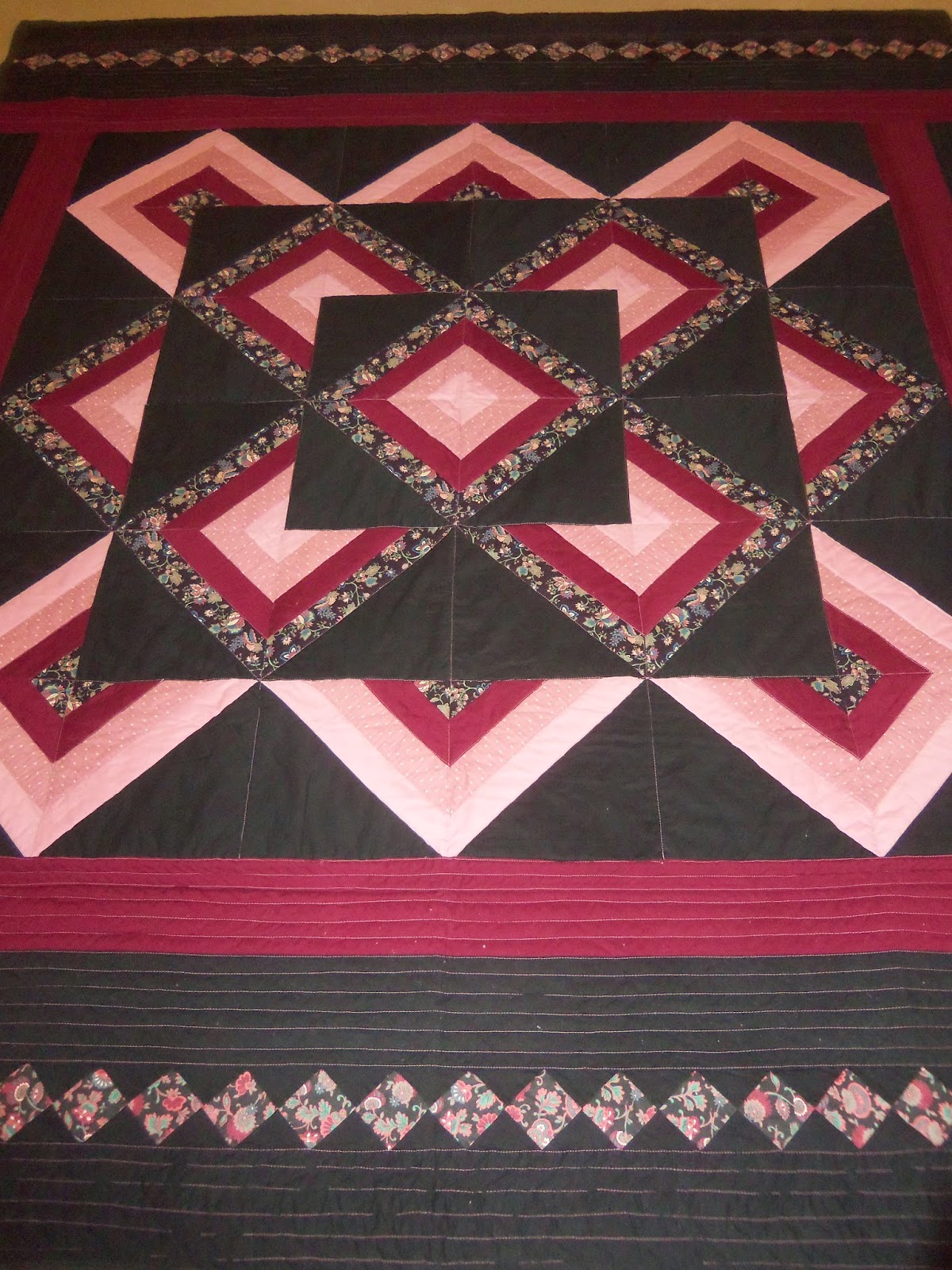 So I will cut off the old binding and replace it and then give the quilt to Paula.  In Dickens' Great Expectations there is a minor character John Wemmick who has an aged and dotty father whom he called Aged P.  Mr. Wemmick tells Pip, "Nod away at him, Mr. Pip, he likes that."  Sometimes I would refer to my parents as the Aged P's - and not behind their backs either.  My mom refused to wash this quilt for fear it would lose its beauty.  So sometimes I would sneak in, get the quilt, wash and dry it, and get it back before she noticed.  The title for this quilt is apt, and I am pleased that Paula wants it and will use it.
Posted by Donna at 7:44 PM 1 comment: 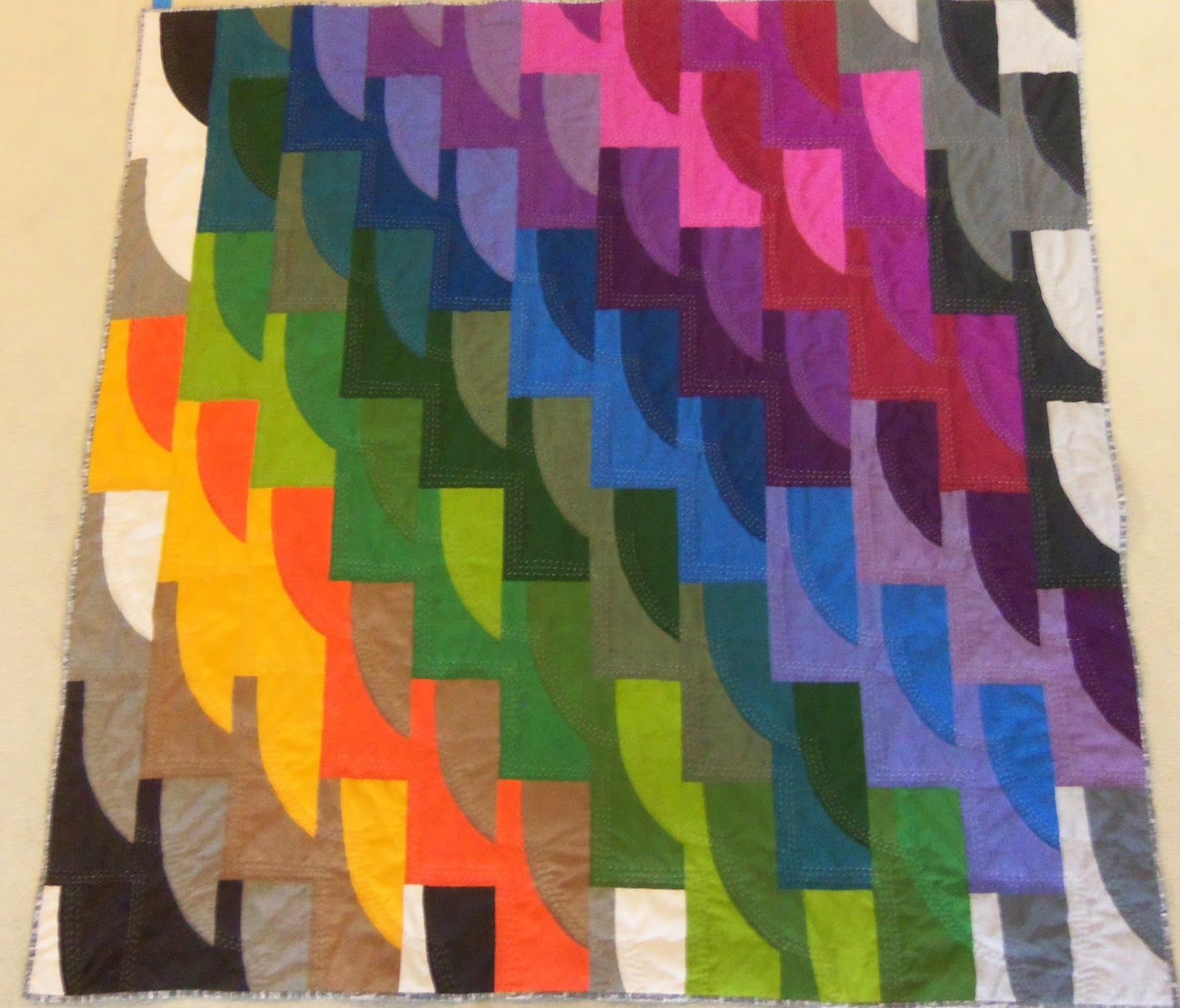 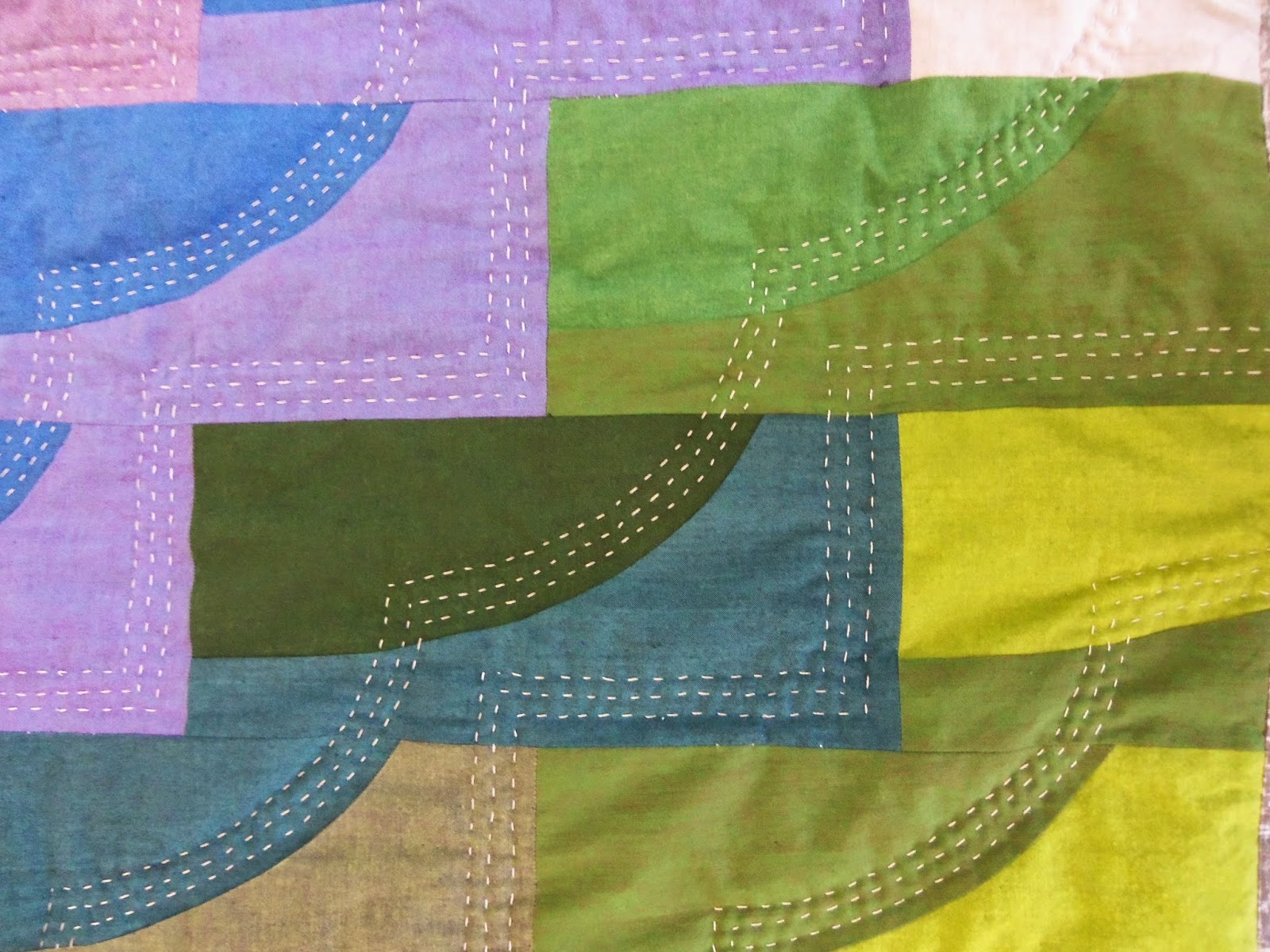 I started quilting this the week before Christmas, just as my mom developed pneumonia.  I took this quilt with me when I went to Lombard and sat.  After she died on December 22, the process of holding this quilt and stitching was soothing.  That it was in the negative temperatures made this activity even more appealing.  For a few weeks the studio held no appeal - all I wanted to do was this quilting with No 8 Perle grey cotton.  Much grieving for two little babies who died the same day as my mom are in this quilt, too.  And now?  It is finished. 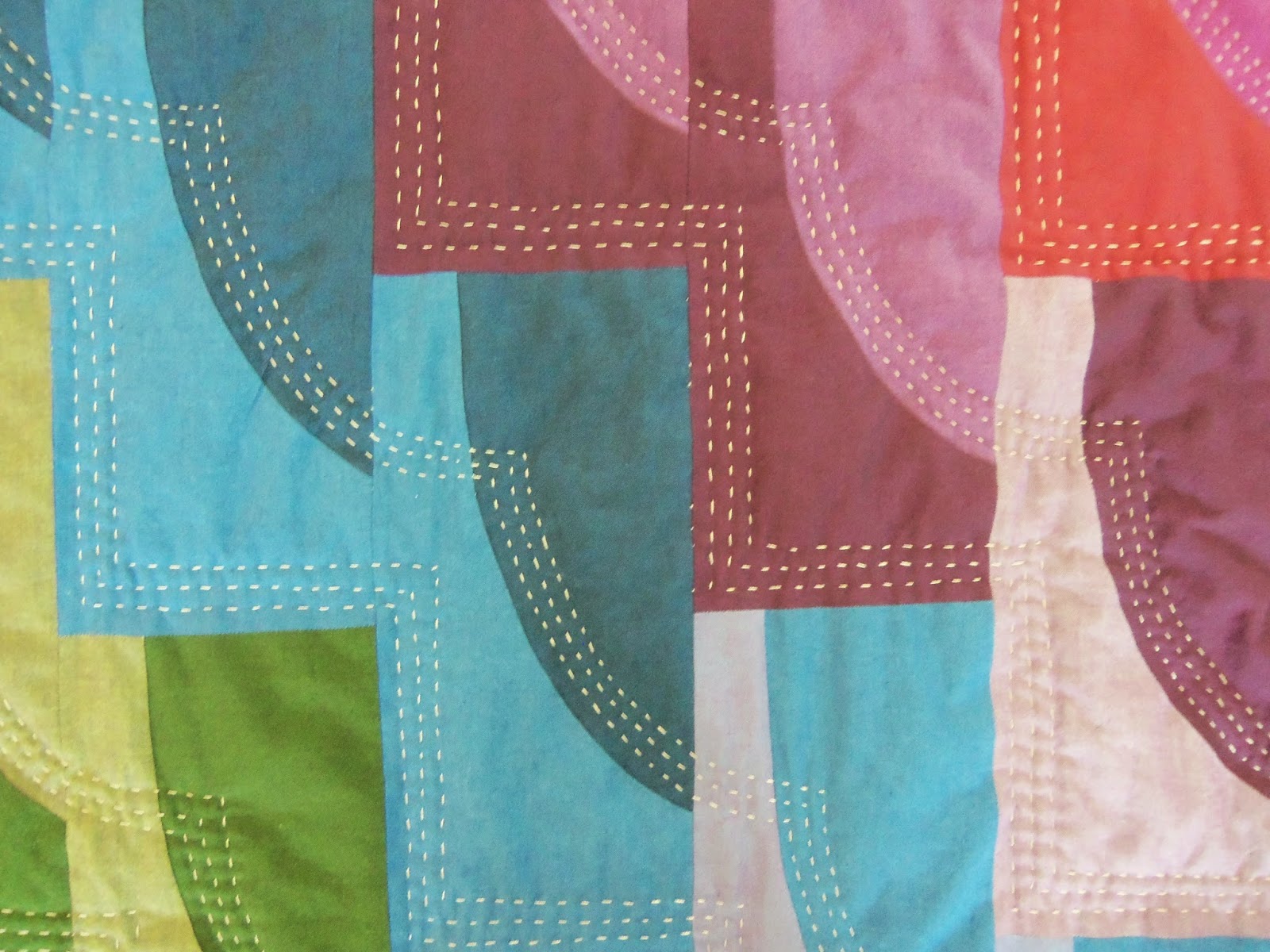 I love this quilt for its texture.  It has a wool bat, the backing is an Art Gallery fabric, and these fabrics are all soft peppered shot cottons.  Here is the first mention of these fabrics.  And then I just tucked these fabrics away until last October when I saw this quilt.  Then I got busy.  Scroll through October and November entries to see how this took shape.  What excites me now is that my nephew Chris is interested in this.  And I would love for him to have it!  It's 72" x 72". 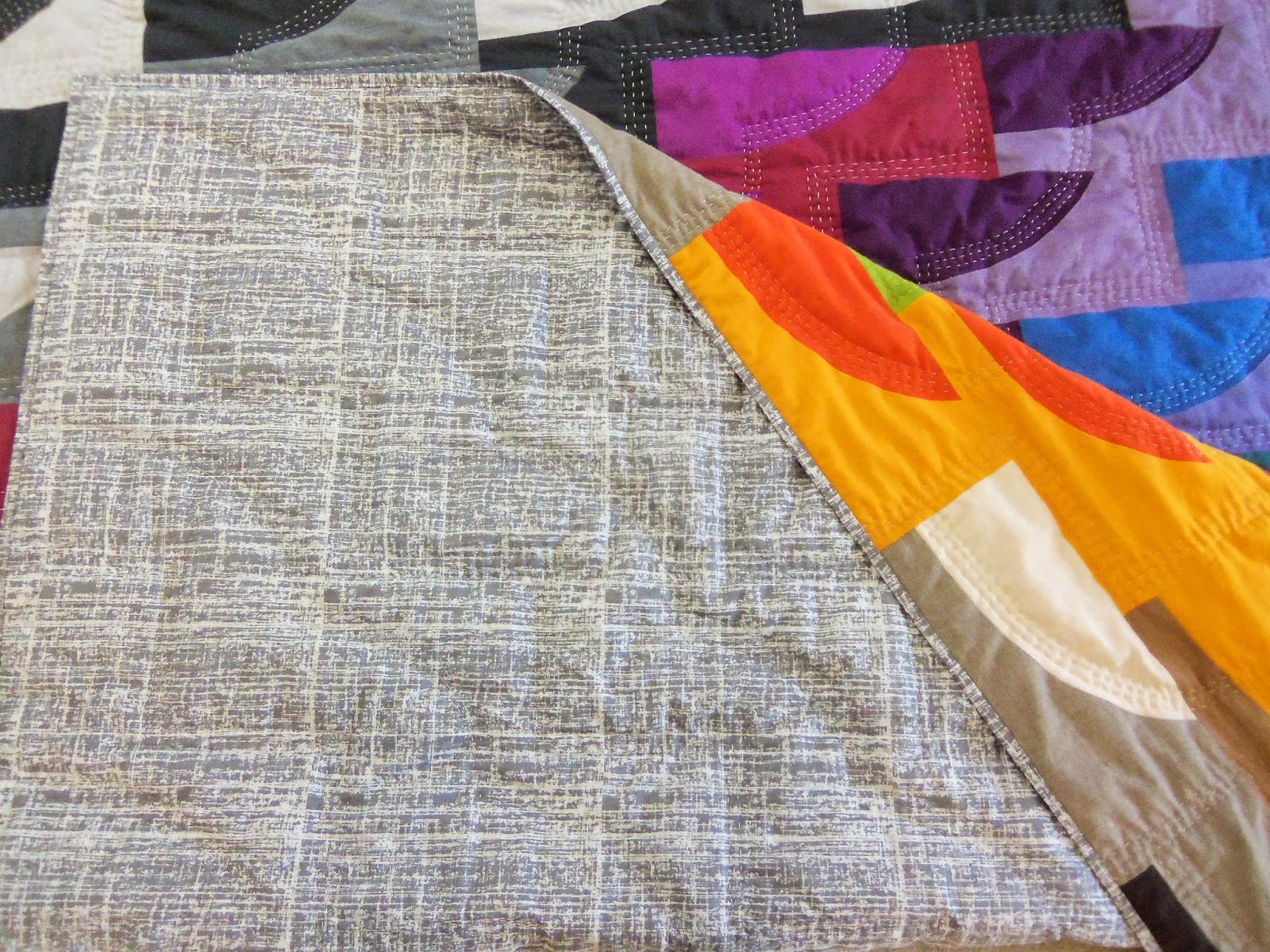 Melancholy Start to a New Year 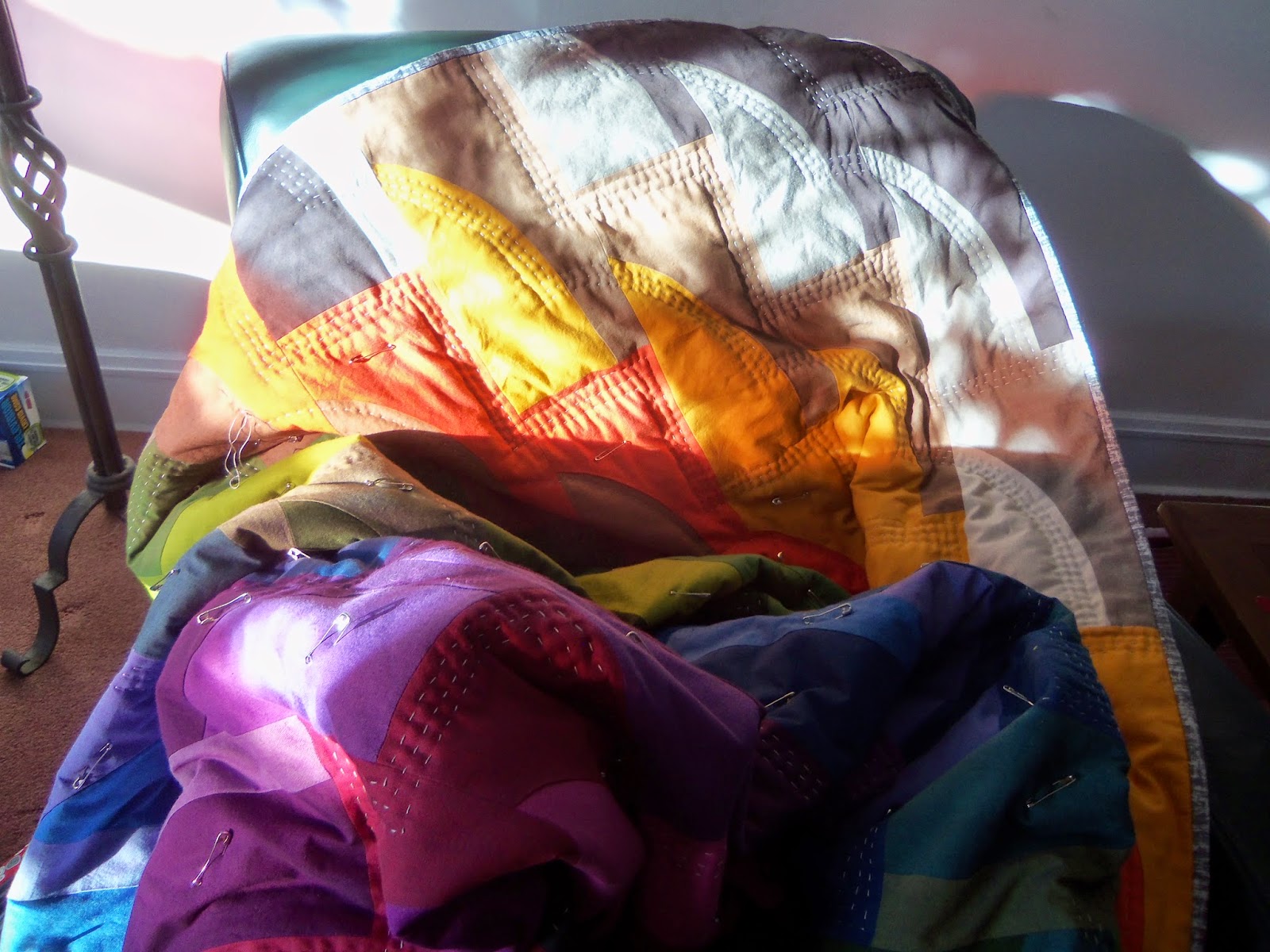 What peace to know my mom is at peace.  My family is I know looking forward to January 10, her memorial service, and the closure it will bring.  I worked through my dad's death by focusing on baby quilts for twins.  Today my heart is so heavy - those twins were stillborn the same day my mom died.  So now I grieve for these little ones, their parents, and their grandmother.  All I continue to do is hand quilt, as if each stitch will help heal the family.  And of course I know it won't.  Their grief is immeasurable. 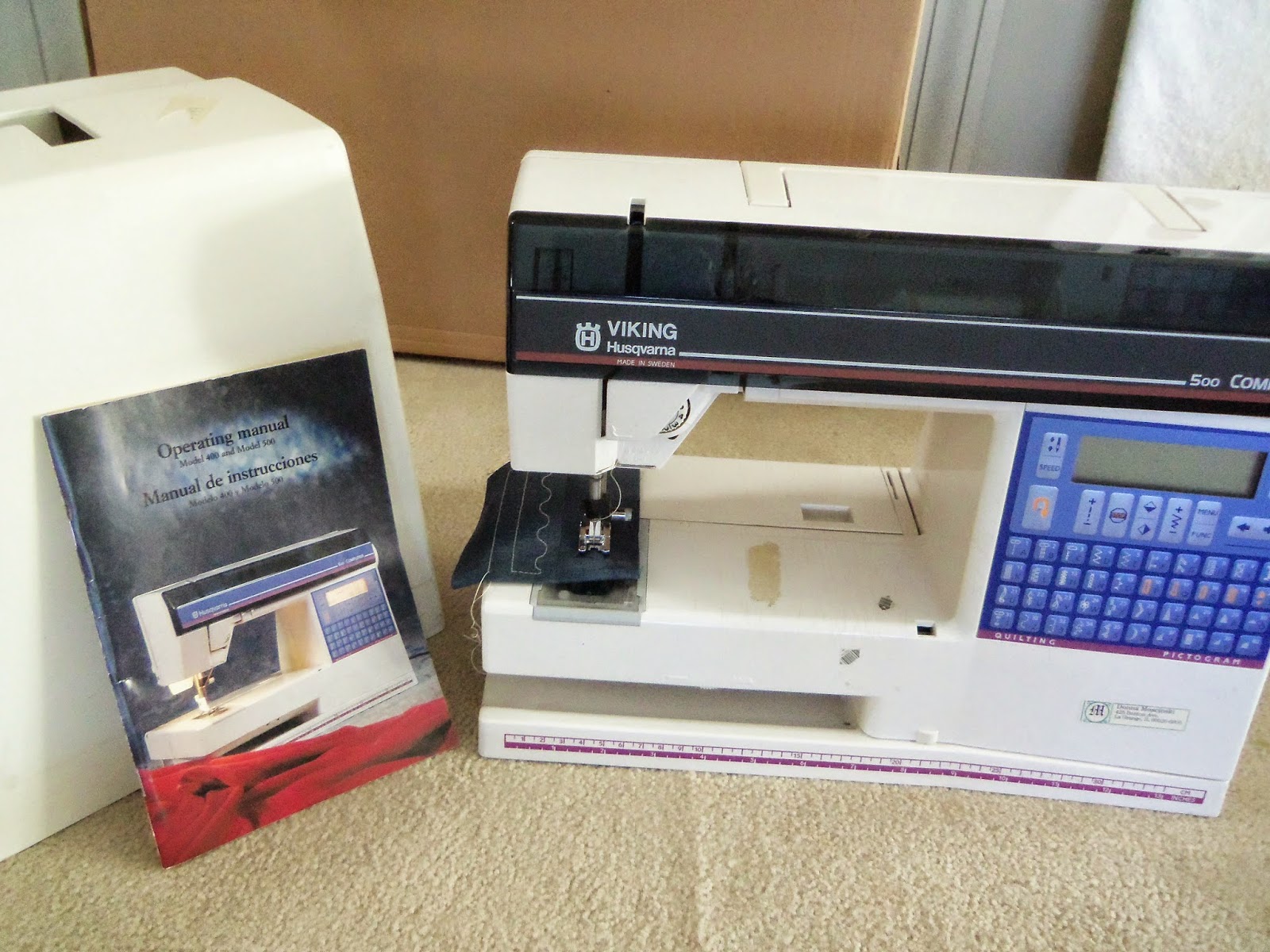 Although this is a shift from the cosmic to the mundane, I am also saying goodbye to an old friend this week.  One of my nieces whom I taught to quilt years ago is crafty and clever.  Leslie, a hair and makeup artist, borrows her mom's machine when she wants to sew.  Well, no longer.  My Husqvarna 500 is one that I bought in the 1980's - I chose it for the needle up/needle down feature as well as the cool sound it makes when it's turned on.  It has been my workhorse and go-to machine until 6 years ago, when I upgraded to Husqvarnas with bigger harp spaces.  And my old faithful 500 has been my traveling machine for retreats and workshops - now I will be traveling with my only mechanical machine, which is fabulous for purse straps and boy scout badges.  All these machines have interchangeable feet and accessories.  I spent time yesterday making sure that Leslie's machine has a set of all the necessary feet - standard, 1/4", zipper, teflon.  I am also including a walking foot and the guides.  I'm sad to see this machine go, but I am thrilled that Leslie has maintained her interest in sewing and cannot wait to see what she does.  (This Husqvarna comes with tech support, too, through my Facebook page and cell  number!)   My mom let me take her sewing machine to college with me.  And she gifted me with that Singer Featherweight, one of her wedding presents in 1948, when I had my first apartment.  I'm proud to carry on this tradition with Leslie.
Posted by Donna at 10:09 AM 4 comments: