A MiniPalette in its new home 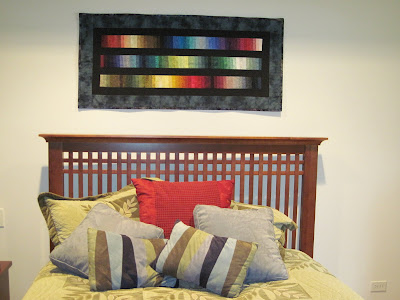 A piece of quilted wall art may be created in isolation. But once it's hung, it takes on the new dimension of its environment. This headboard of Janet's bed is one that I love - it is Mission and Prairie and simple and beautiful. The combination of this Mini-Palette and the headboard appeals to my aesthetic and obviously to Janet's. 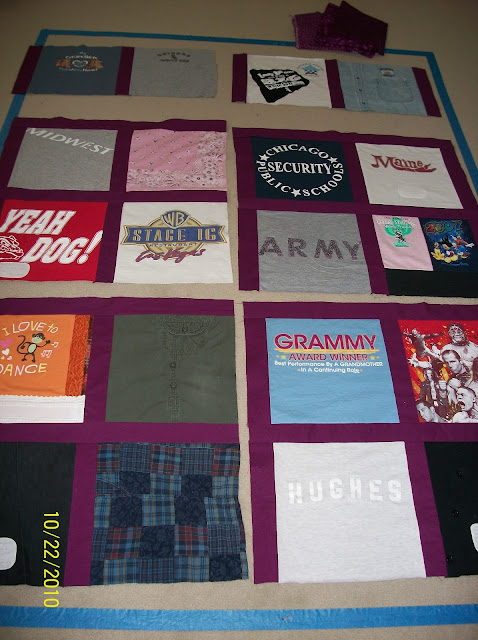 With every t-shirt quilt I do, I am always amazed at how sashing strips define the design and unify the shirts. I usually start with vertical strips that are the same length as the height of the pieces. These strips are invaluable in making the blocks hold their shape. This quilt is going to be for little Ella Hughes's first big girl bed, and the purple is perfect. There's a terrific print that will be the outer border. The backing will be a combination of various purple prints, all of which will make this perfect for a little girl's bedroom.  One of the fun parts of quilting is starting with 75 pieces which then turn into 40 pieces which then turn into 6 pieces. which then - well, you get the idea.  Very satisfying.  Below is my latest envelope purse with only one side of the strap attached.  This is one of those days where there aren't enough hours. 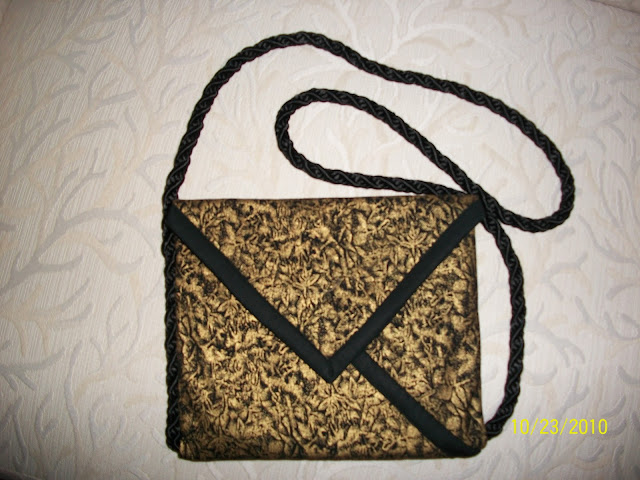 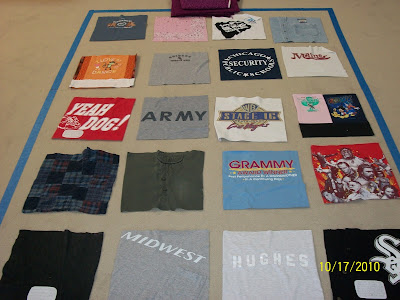 Sheila Juchcinski Hughes is a woman I taught with at Kennedy, and she started me in the direction of life celebration quilts.  When her mother (who was younger than me) died, Sheila asked if I would put her t-shirts and sweatshirts into a quilt.  See this former blog entry.  There was also a baby quilt made from Sheila's mom's pajamma bottoms - that was for the first Juchcinski grandchild, and that was almost 10 years ago.  Now there are 7 grandchildren! A few years later Sheila's sister Bridgette asked me to make additional quilts from the clothing. 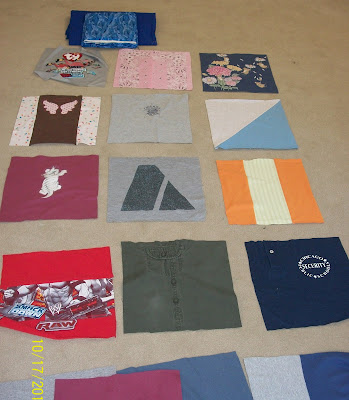 Now Sheila has married and has a daughter.  She's been collecting clothes from relatives to make a "big girl" quilt for daughter and a sofa throw for her mother-in-law.  Ella's quilt has clothes from her aunts/uncles, cousins, grandparents - and of course her mom and dad.  Mrs. Hughes's quilt is similar but includes baby clothes that are so small they had to be pieced together to make a usable block.  Ella's quilt will have some purples, and Mrs. Hughes's will use blues.

This idea is a brilliant one.  Even though I have a couple of commission in queue, Sheila's have leaped to the front of the line because I feel such a connection with her family.  The remaining pictures just show the variety of blocks.  Sheila's sister-in-law wrote a little note for the four pieces of clothing she sent.  I scanned these notes onto an iron-on transfer so that these notes are a part of the quilt.  The original notes I'm putting into the pocket of Sheila's father's denim workshirt. 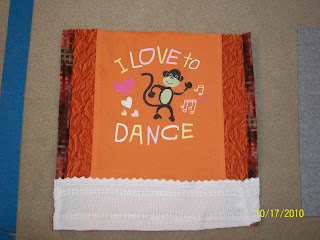 This little romper was so small I had to enlarge it with some of my fabrics. What's on the bottom is a piece of Ella's christening sweater. 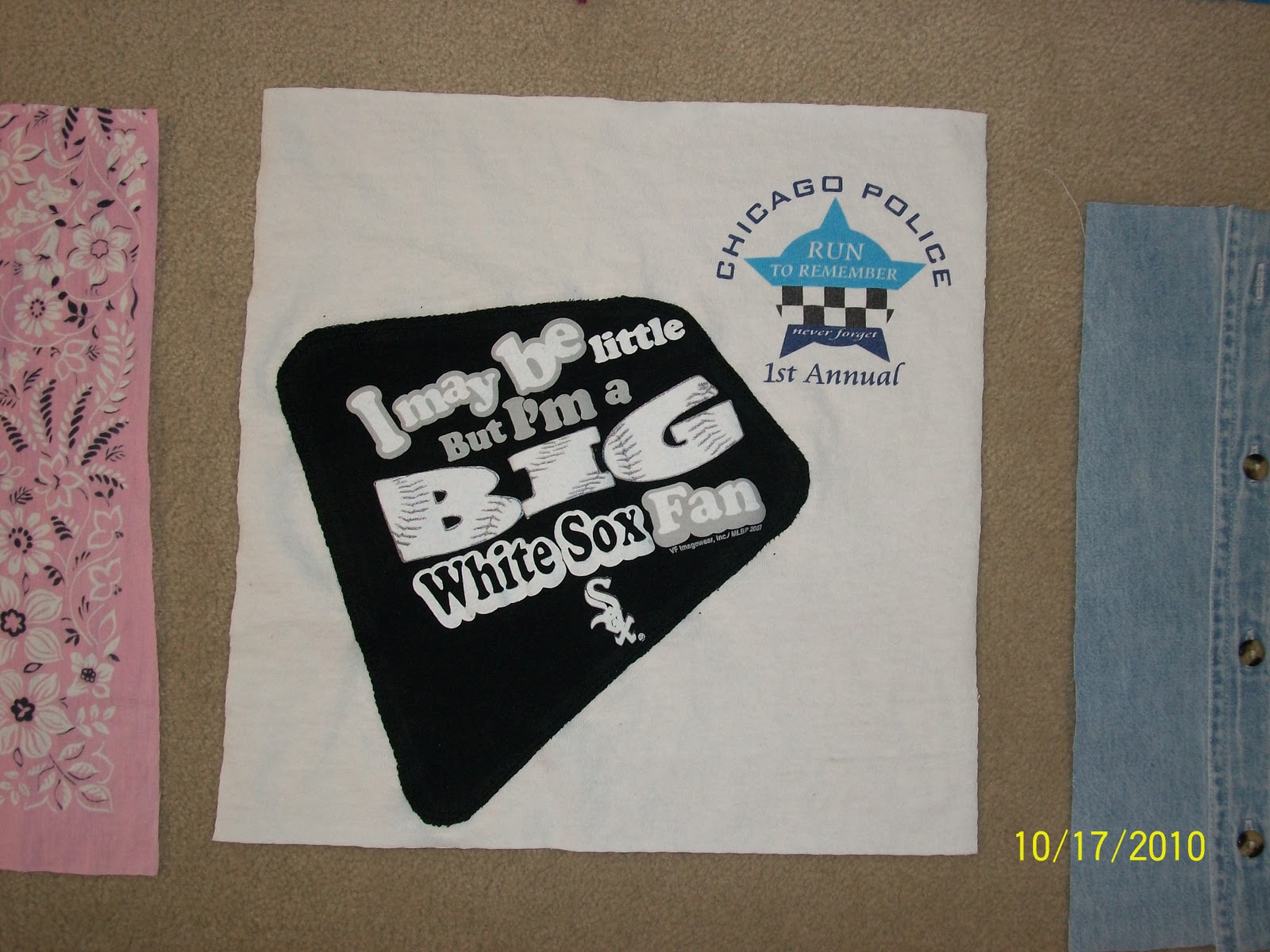 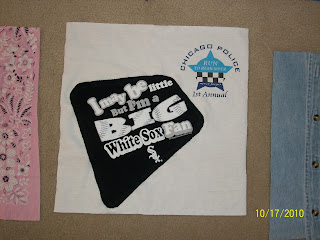 And this block is special because it incorporate something from both of Ella's parents. These finished projects will be so meaningful.
Posted by Donna at 7:30 AM No comments: 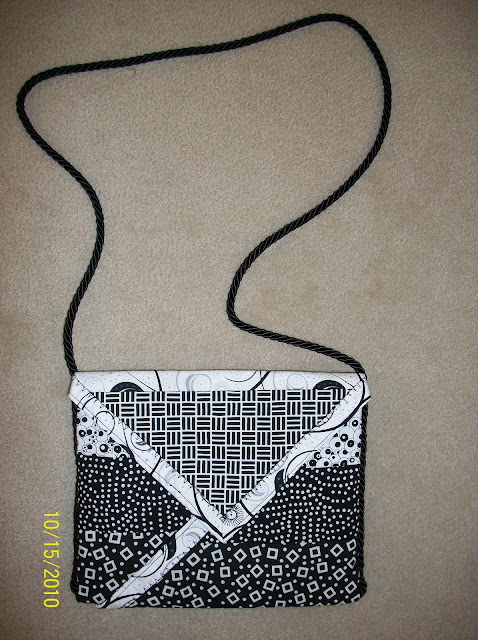 I have a QFF - Quilting Friend Forever in Wayne Rhodes.  He's my quilting Doppelganger, even to the extent that both of us are left-handed and we each sew on a Husqvarna. My friendship with him is invaluable.  Last year I made a quilted jacket for his wife Wendy.  A couple of times John and I have gone out with Wayne and Wendy. If Wayne and I lapse into quiltspeak, there is great rolling of the eyes by John and Wendy.  Last night they were over for dinner, and I gave Wendy this little purse made from her jacket scraps, perhaps as a bribe to keep her eye rolling to a minimum.  John is another story...
Posted by Donna at 8:52 PM No comments:

Is this fabulous?  Or is this fabulous?  I think it's fabulous.  Look at the luminosity in this piece!  I intended this to be a vertical wall hanging for my studio - what a great lesson it is in the color wheel and values.  But when I showed this to Janet, my ortho-bionomy massage therapist, she immediately saw it as a horizontal wall hanging for above her Prairie-style headboard.  So a picture of this piece in situ will follow at some point.  It is 22" x 48".

One of the reasons I wanted to make this Jinny Beyer pattern is because my sense of color is emerging.  While I'm getting better, I truly do have to refer to the color wheel hanging in my studio.  The Jinny Beyer Studio sells these little pre-cut fabrics - there are 150 in the above wall hanging - for $12.50 each.  Each swatch is 1.25" by 3.5".  And I have just ordered three more sets of these swatches.  I'm eager to work with these fabrics again and perhaps experiment with different borders and bindings.
Posted by Donna at 3:06 PM No comments:

Control in the Studio 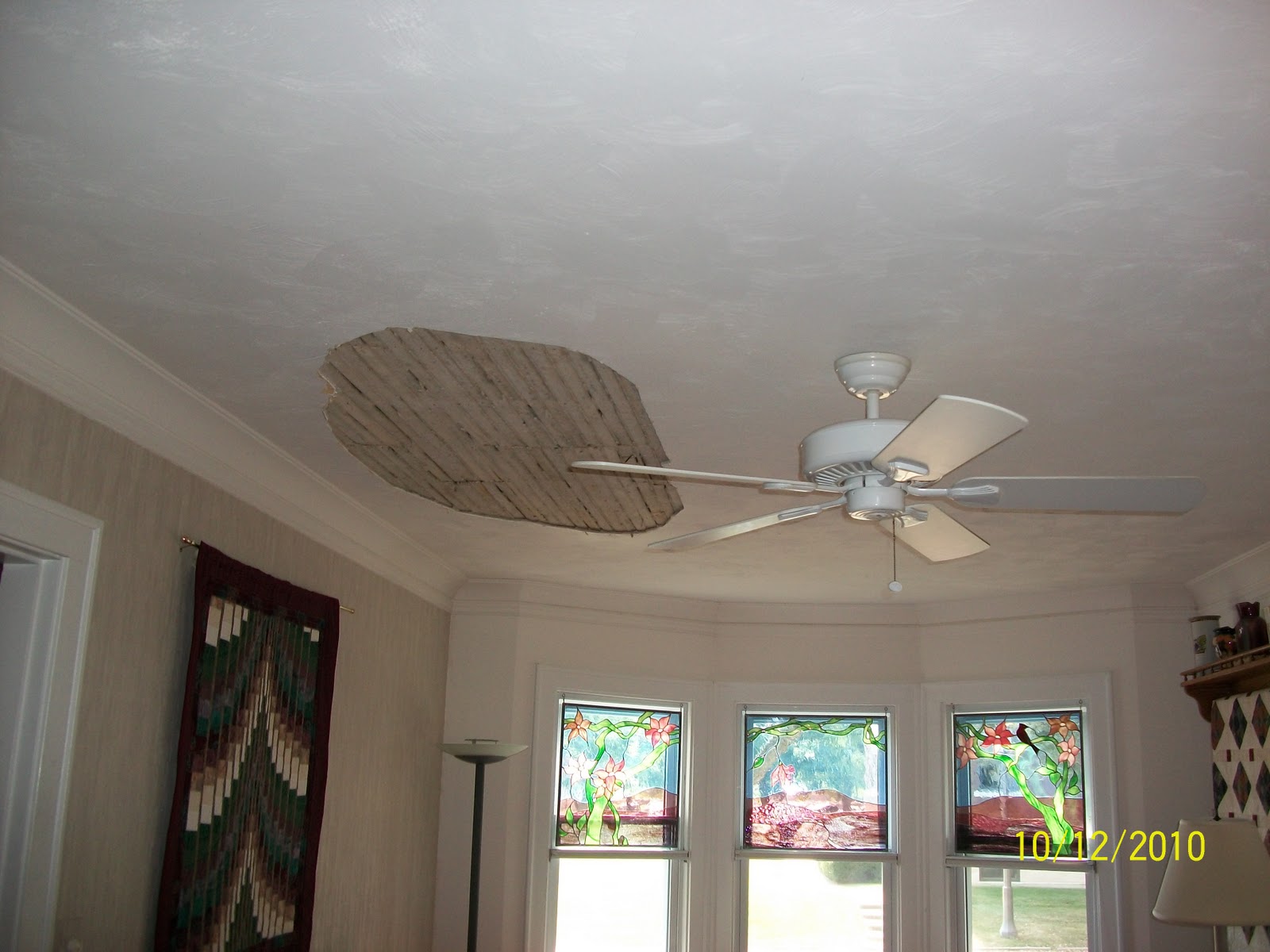 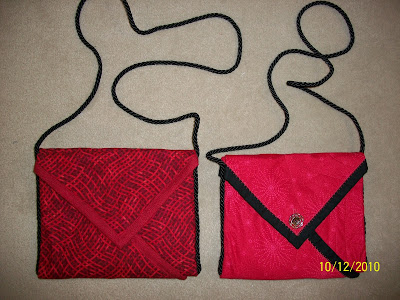 There are several reasons why I quilt, chief among them color and design.  But control certainly enters into it.  There are parts of life, especially in my life at this point, that I have no control of.  To balance these uncertainties, I create and sew.  Touching, ironing, cutting, sewing, quilting - all are familiar steps I can use with new colors and designs.  And the process is soothing and satisfying, especially when there are finished products.  Here are two more Jinny Beyer Envelope Purses - 9" x 7".  The handwork is getting easier, and each time I do this pattern I learn something new.  Christmas presents?  Perhaps.  All I know is that I need to be doing these right now.

Oh, I forgot.  A part of our living room ceiling fell today - we now have a lovely 6' by 3' problem area - I mean decorating opportunity. 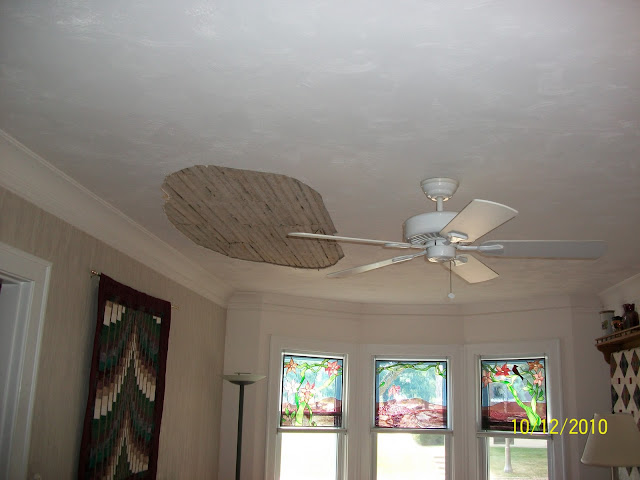 Quilting - It's All About the Texture 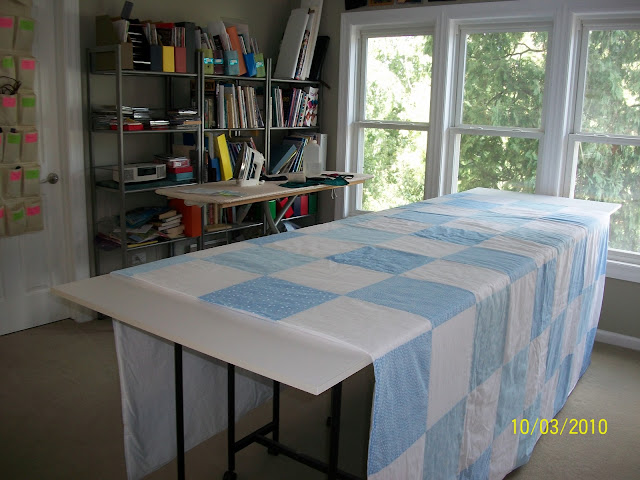 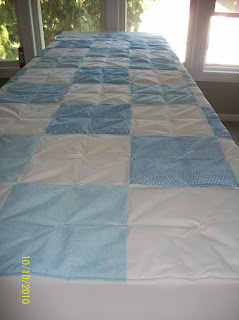 Good blogger friend Josie Ray created this Miss Rumphius quilt for her mother.  They knew they wanted it tied but just haven't gotten around to it.  So they commissioned me to do the tying.   Half the battle of tying a quilt is having the table(s) to do it on.  My two standing tables placed end to end are the perfect place. Miss Rumphius was very content in my studio, and slowly but surely - after four very scattered hours - all the tying was complete.  Quilting is so much more about the three layers; it's really about how these three layers attached to one another.  Tying or quilting is what gives the quilt its texture and dimension.  This quilt feels as light as it looks!  While I do love a quilt that is machine quilted, some of my favorite older quilts are ones that I have tied (most of the Trips Around The World) using a polyester batting.  They have worn well over the years. And Miss Rumphius is going to be happy for many many years! 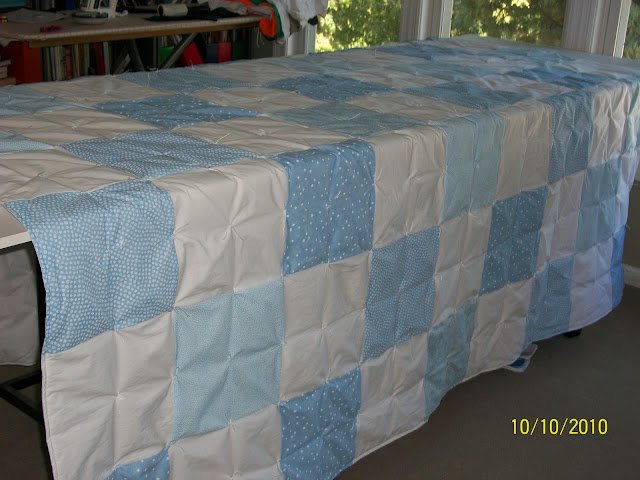 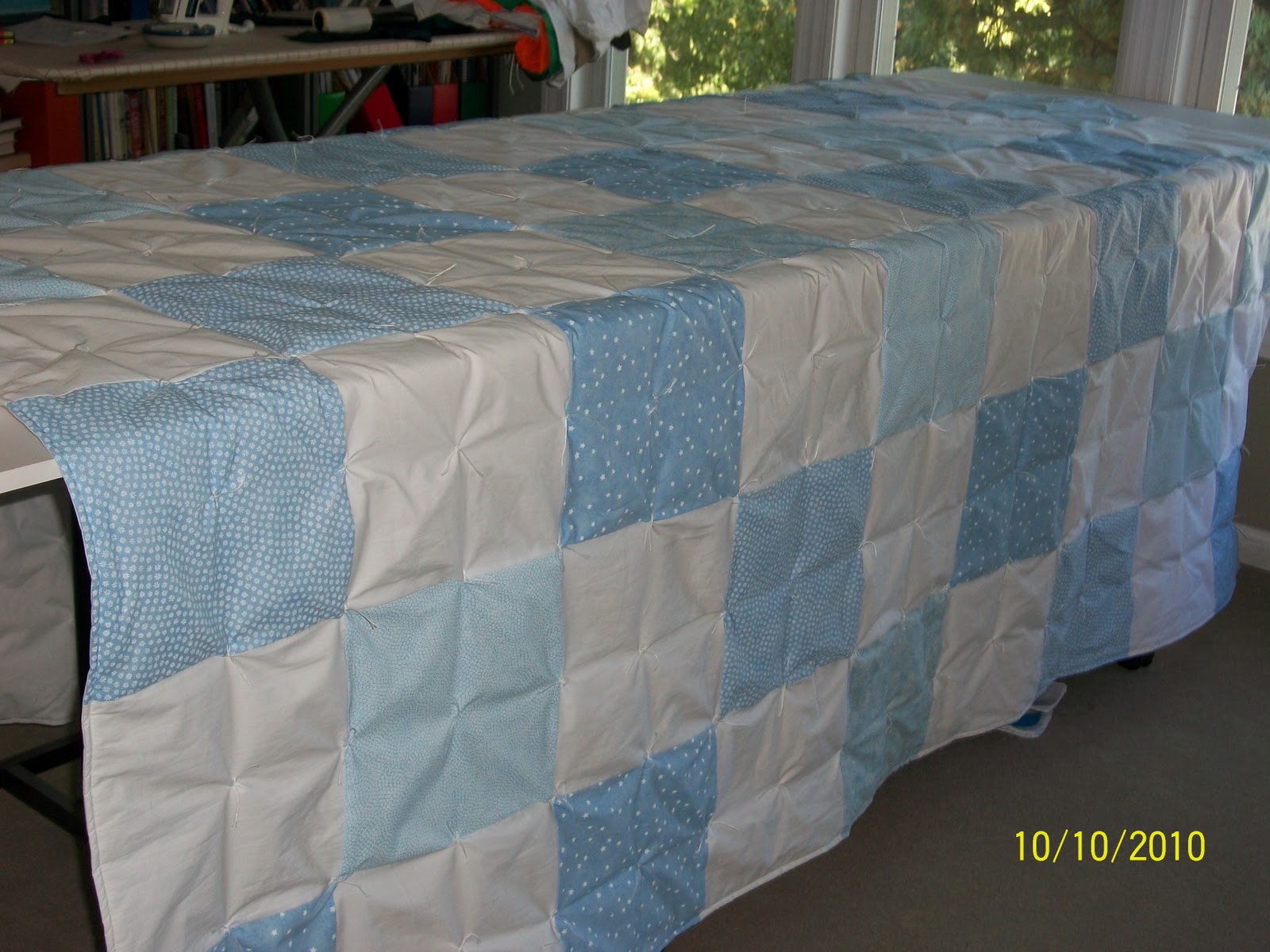 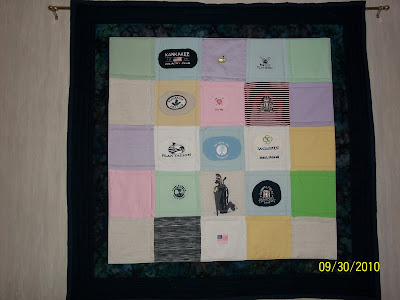 The quilted wall hangings for Joyce Rainbolt's family are complete.  Joyce died in March after a 10-month struggle with thymic cancer.  Her enthusiasm for life is evident through her clothes and caps.  She was a golfer and a sports enthusiastic.  She was Bill's wife for almost 40 years.  This one is Bill's. 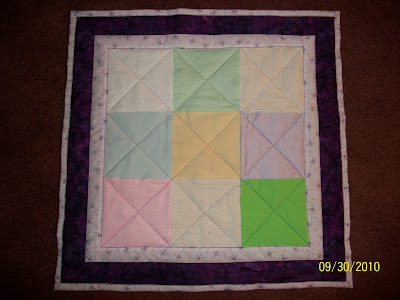 Joyce was a daughter.  This wall hanging is for her mother. 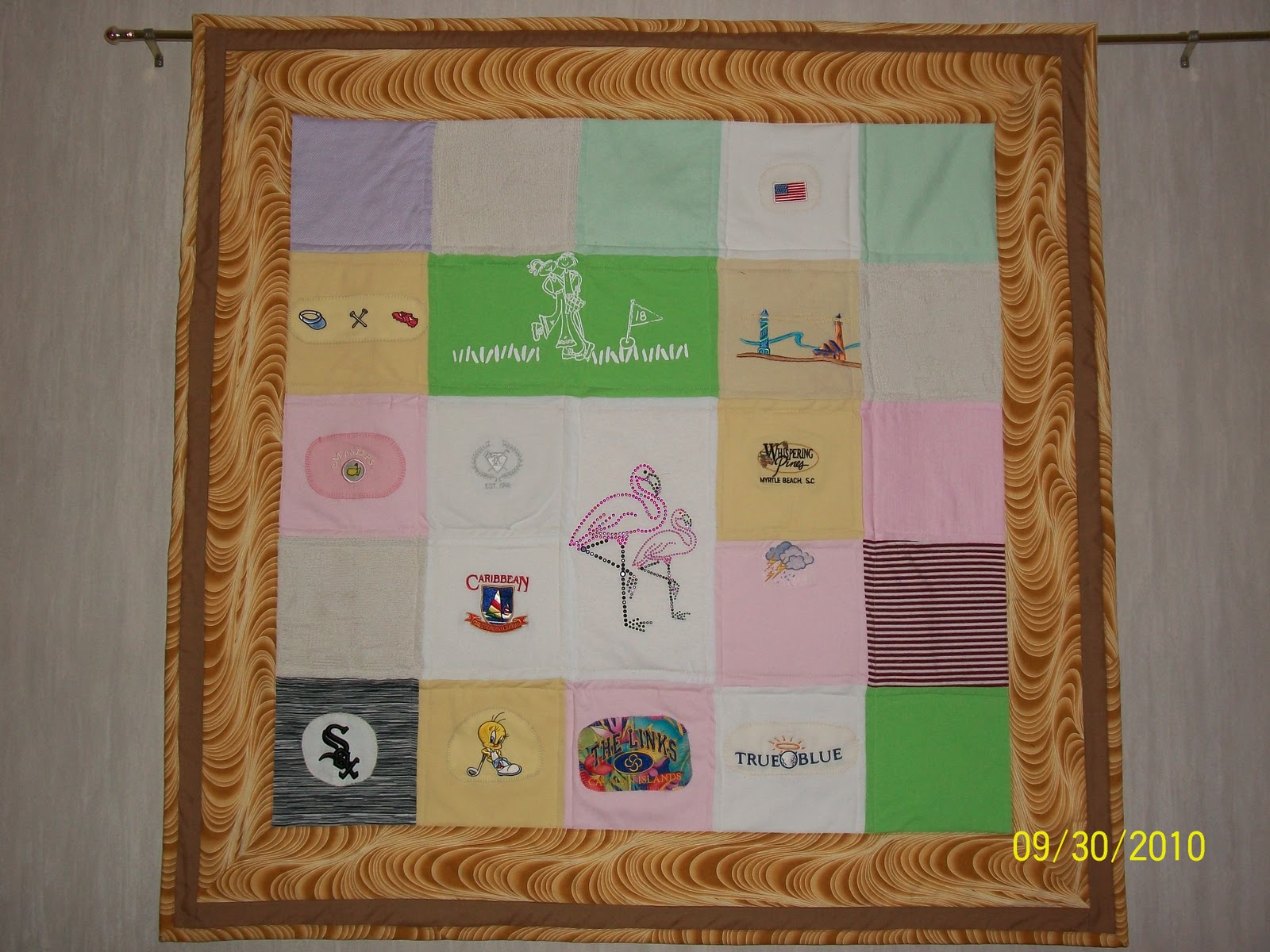 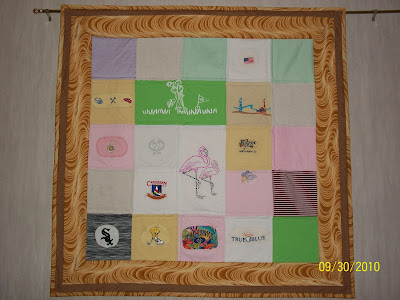 Joyce was the mom of Jeri and Jill.  This quilt is Jeri's.  Both Jeri and Jill have small children.  Above all, Joyce was a grandmother and passionate about her grandchildren. 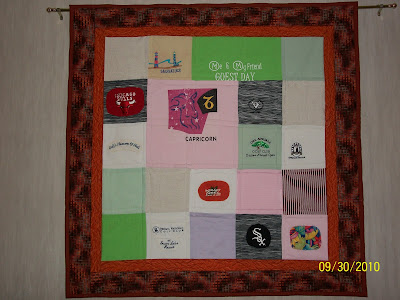 This last wall hanging is Jill's.  She was the one who contacted me about using her mom's clothes for wall hangings.  Jill's birthday is this week.  It touched me immensely to hear her say getting this wall hanging is like getting a birthday present from her mother.

This family knows how important it is, especially with small children, to keep talking about Grandma Joyce.  This way,  she can continue to be present in their lives.
Posted by Donna at 7:54 PM 1 comment: