This week's "work" - and lessons learned

Before starting a project I, like so many others, audition fabrics. This current pile is for the "Winter" challenge. My Chicago Modern Quilt Guild is doing a calendar fundraiser and participating members have been assigned a season. I sort of have an idea of what I want to do but am giving myself the final days of May before actually cutting into any of these fabrics.

After having lunch with a friend's daughter last week and getting the baby clothes of my friend's granddaughters, I spent part of the weekend deconstructing these clothes. Michele wants a quilt made from the clothes her little girls wore. I'm not sure this quilt will win any design awards, but it will definitely hold a strong emotional appeal. I would like to tell Michele what I am going to do with these clothes, but I'm still not sure. Perhaps 8" and 4" blocks. I thought about setting them on point, but this quilt will not need any drama.


Out of a charm pack of Hoffman Batiks, I put together a tote bag, doing the handles the right way and creating great interior pockets. When I was a QuiltCon in Texas in February I bought some special shot cottons. They are beautiful and cost a bit more than I normally pay for for fabrics. But these cottons almost glow. I also bought a new bag pattern, one that uses grommets. But as I began to think about this new pattern and the shot cottons, I got the heebie jeebies and reverted back to my comfort zone of a familiar tote. But in my attempt to get the most of these expensive cottons, I forgot to pay attention to proportion. And what I created out of these shot cottons is the loveliest bag ever - for a giant. The lesson? Pay attention and measure measure measure. The end. 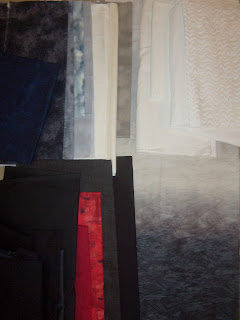 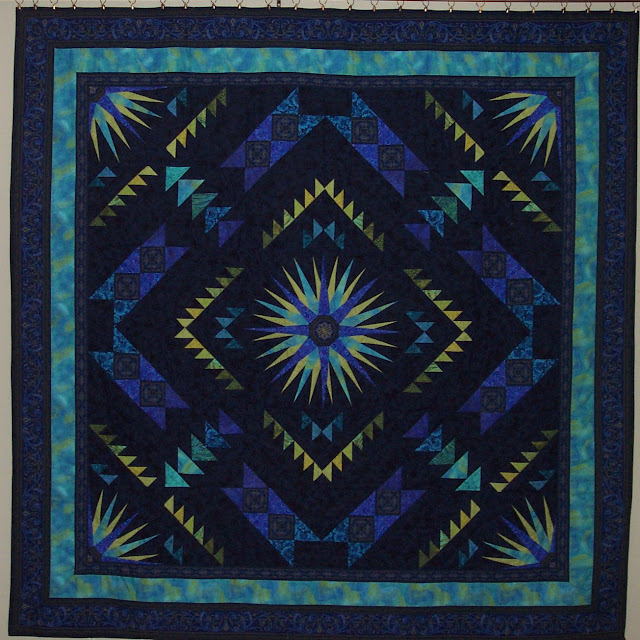 I made this quilt as I was moving into my new studio in 2007, and it's hung here ever since.  It's Jinny Beyer's Around the World design.  I bought three kits and made three quilts - one for the long-arm quilter in Tinley Park in exchange for quilting the one of my bdd, and this one, which I quilted.  Last week we had the furnace/AC man in, and he saw this quilt and fell in love.  He made me an offer, and I immediately took it down.  Part of the deal involves him getting two 4' x 8' sheets of homasote here, so I can have the design wall I've been wanting.  As much as I have loved this quilt and the work I did on it, I'm happy it's going into a new home. 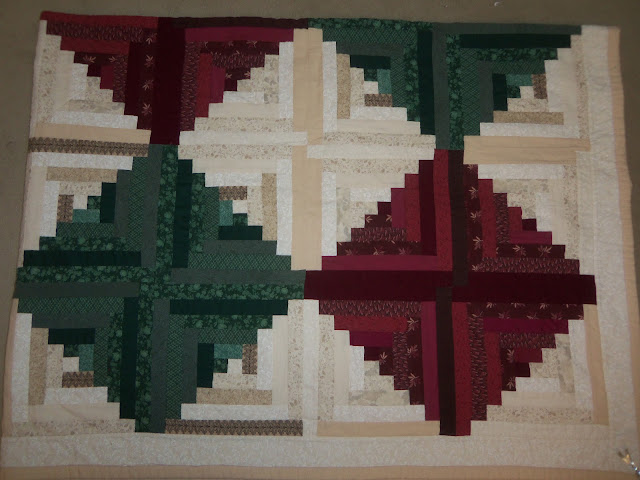 Furnace guy Brian is a Western Springs firefighter and is part of a fundraiser for another firefighter who is battling ALS. For their silent auction I am donating this gently-used log cabin quilt that I made years ago for my parents. When they downsized it came back to me. This 74" x 96" Log Cabin beauty needs to be used, and I'm glad it will be a part of this cause.
Posted by Donna at 3:28 PM 1 comment:

My Quilting and Sondheim 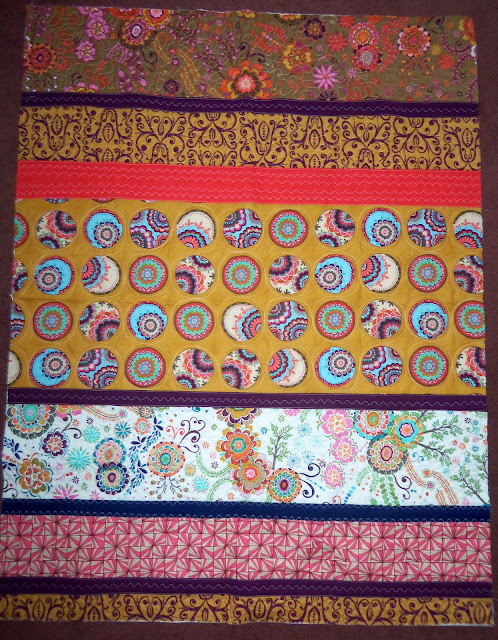 In Stephen Sondheim's Sunday in the Park with George there's a song lyric:  Work is what you do for others; art is what you do for you.  I have always loved that line.  Last week and this week I am working.  I quilted two baby quilts made by my Kennedy teacher friend Jen - one is for her yoga teacher, and the other is for her.  I love how Jen, a beginning quilter, made these simple quilts of horizontal bands of fabrics.  So simple but so nice.  She will now do the binding to finish off the quilts. 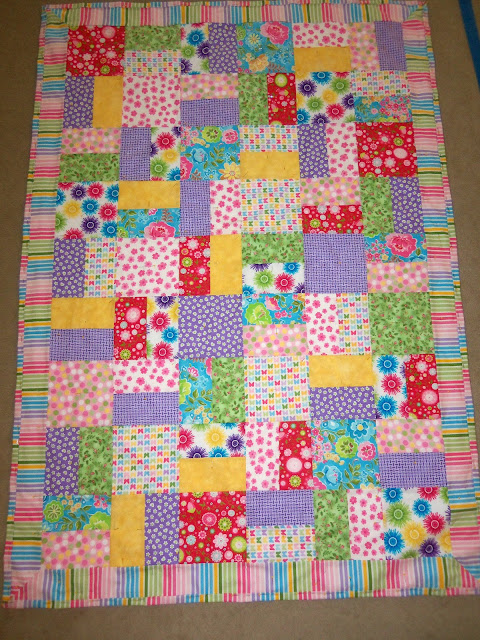 My other work is for a woman who loves to buy and cut fabric.  But she doesn't care for the sewing part.  So she puts together her "kit", and I do nothing but follow her directions and layout.  Here's the first one she designed that I did.  She mentioned she has a couple more grandchildren.  I will happily work for Roberta because I like her projects. 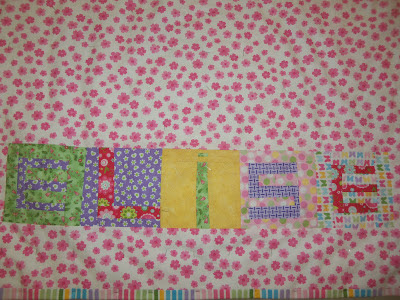 Roberta requested her granddaughter's name on the back of the quilt.  So I put what I learned at the February meeting of the Chicago Modern Quilt Guild to use.

I have one more commission to work on and then I can focus of my art - a Winter seasonal challenge due in July and something fabulous with three Marcia Derse fabrics...  Art is what I do for me.
Posted by Donna at 10:32 AM No comments:

Putting labels on things is so difficult.  And I've tried to avoid this labeling.  However, as the Modern Quilt movement gains momentum and as I've become increasingly involved with the Chicago Modern Quilt Guild, I must declare that I am a modern quilter and am finally able to state why.  Years ago I was attracted to Nancy Crow and her work - I think that's when my path as a modern quilter started.  What has finally made me able to articulate the following was going to QuiltCon in Austin in February 2013, the first Modern Quilt Convention.  Two speakers especially touched me - Heather Grant and Yoshiko Jinzenji.

Heather Grant helped me to understand what can be contradictions in the Modern Quilt world.  She likens the modern quilter to a diner approaching a salad bar.  The Modern Quilter, beginning a project, goes to the salad bar of modern quilting techniques.  These techniques include but are not limited to:
Seriously, low volume vs graphic color?  Sure.  Both of these are aspects of modern quilting.  As a modern quilter I can pick and choose from the above and also go out on my own.  Seeing the quilts at QuiltCon in the above context helped me make sense of this movement.

And there's an attitude involved with Modern Quilting.  This attitude values workmanship and embraces a freedom from rules balanced with freedom in construction and respect for tradition.  Jacquie Gering refers to herself as a "proud maker."  That there are quilters across the nation and world embracing the modern movement is exciting.  Mary Fons At QuiltCon observed that there are young women coming to quilting with no sewing machine experience or knowledge.  And it's these people that modern quilt guilds need to embrace and welcome.

Modern Quilt guilds, the Chicago group included, are making the decision whether to be a part of the Modern Quilt Guild.  For a group the size of Chicago's modern guild, it's a financial decision that will be about $14 per member.   I'm crazy about so many of the women in this guild.  However, the Chicago girls - including Jacquie Gering and Robbi Eklow and Ebony Love (three with national recognition) - are not enough for me.  I want to be a part of the larger movement and continue to have my passion for quilting in a modern style nourished while - well, let me just use the mission statement of the Modern Quilt Guild:    supporting and encouraging the growth and development of modern quilting through art, education, and community.


I love that quilting involves finding one's own path.  And I love that my path has intersected with so many quality people.  And while I may go through moments when my sewing or creativity is stuck or blocked, I am excited by the projects in front of me - and by those projects I haven't even dreamed of... 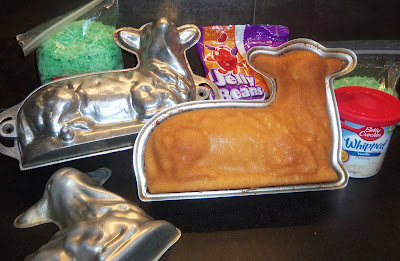 It's off delivering lamb cake kits we go...  This tradition of baking lamb cakes and delivering the kits (frosting, green coconut grass, jelly beans) was one that John's mom did years ago.  And I love carrying on this tradition.  We missed Easter this year, and I am trying to make up for it by celebrating Orthodox Easter.