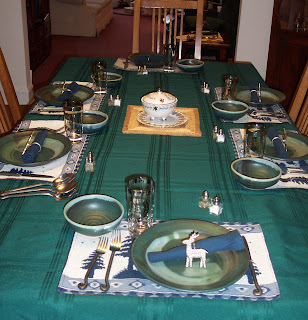 Last spring I blogged about how I couldn't do what I do if it weren't for John. Look at this holiday table that he just set - it's beautiful! Tonight John's sister Chris and her husband are coming for dinner - it's Chris's last day of school and the beginning of her Winter Vacation. Joining us are Laurel and Richard from Western Springs. They gave us some 25th Anniversary tchochkes, I think as a lark. But here's the real lark. John likes using them, and I am beginning to think they are pretty. Uh oh, what's happening here? 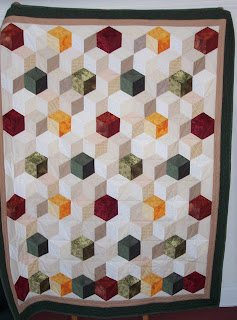 My college buddy Dodie - Dora Mae Hansen Wallace - died December, 17, 2006 after a 2-year battle with lung cancer. She was 57. I turned 58 in October and thought, "Dodie never got to see this age - how blessed am I." This blog opened with thoughts of Dodie, and here it is a year later.

In September 2005 I was with Dodie for a long week's worth of treatment and took a hand project with me. I made tumbling blocks which then turned into a quilt for Dodie. She had the quilt hung in the Anderson entryway, and it looked fabulous there. Furman recently told me that he took it down and has been using it, which pleases me immensely. I used a lot of neutral tumbling blocks to calm the effect of the quilt down. And I have a lot of beautiful tumbling blocks leftovers. Teaching the Reversible Quilt process (Quilt-As-You-Go) is something I love doing, and I'm always creating new sample pieces. 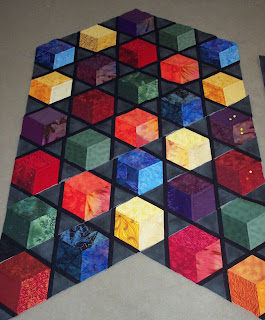 So, using the Tumbling Blocks and the Reversible Technique, I began to play. And there are no directions for this project. I do quite nicely right angles; most quilters do. But these tumbling blocks are 60 degree angles. I figured a way to join these blocks so I could use straight diagonal seams to connect the rows, and the resulting shape is an arrow. But really, an arrow-shaped quilt? I don't think so.


With my limited math skills, I have cut a top, batting, and backing the width of the quilt (37") by the height of the arrow tip (11"). As soon as I quilt this section, then I will cut it into 3 pieces that I'm hoping will fill in the top of the arrow as well as that bottom portion. It ought to work! 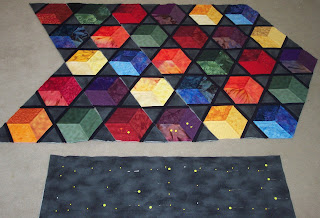 To honor Dodie's life and commemorate the end of this first year, her daughter Virginia and I are going to the Red Light on West Randolph and having the tasting menu - Dodie would have approved. I think Gin and I are both looking forward to this celebration in an odd sort of way.
Posted by Donna at 7:34 AM 1 comment: 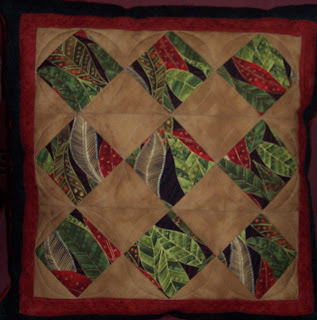 There are some wonderful leftovers from Cecilia's new bed quilt. including the fabric used for the border. And her bedroom is the perfect backdrop for decorator pillows. I think there will be some pillows yet-to-come. Here is the first, just in time for Christmas!
Posted by Donna at 7:42 AM No comments:

Christmas Fun in the Land o'Quilts 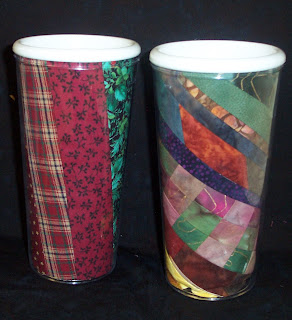 I found some pretty cute presents for my quilting friends - Susan, Midge, and Terry. And it's a project. They make mini-quilts which are wrapped around a big cup and sealed in plastic. Terry couldn't come over and play today, but Susan and Midge did. And of course I bought myself one, too. It took us about 2 hours, and it was fun to see how each of us work. Susan has suggested making seasonal mini-quilts and then swapping them out. Hmmm...
Posted by Donna at 7:49 PM No comments: 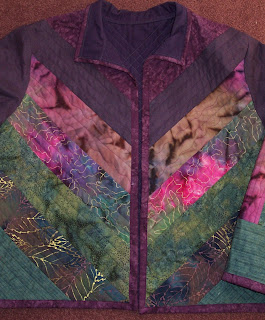 I have always known how to make clothes, but that has held no interest for me - probably because of my not-so-great body shape. Quilting has been so perfect because there's no need to fit flat fabric to curves and bumps. Still, I cannot resist doing what so many other quilters have done: making quilted clothing.

Neighbor Susan and I took a class two years ago and made fabulous jackets. While she has worn hers alot, I have just recently started wearing mine (thanks to the latest 10-pound drop at WW). Still, I always feel like the Pillsbury Dough Boy. Picture Ralphie's little brother from "The Christmas Story" when he has on his snow suit, falls, and really can't get up.

Despite this feeling, I have forged ahead and made another quilted jacket, pictured here. I think the colors and pattern are so striking. It was foundation-pieced onto a cut-apart sweatshirt. My dream is to have a wardrobe of black slacks and black t-shirts and a variety of fabulous jackets to wear over them.

The image here is the sheet of fabric I made from various fabric strips.
Posted by Donna at 8:29 AM 1 comment:

A Burst of Energy


The past three years of quilting have developed a rhythm, which isn't quite cyclical but certainly repetitive. I'm coming out of a busy time that's been punctuated by holidays and vacations. ADD quilting periods are followed by those wonderful times when several projects get completed within the same week. And that sense of completion allows me then to concentrate on a project I've been putting off. And then? start those things I've been wanting to start. The Foundation-Pieced Reversible Quilt is a model for a workshop at SusanMarie's in February. The Attic Windows pattern on the front and the lovely Asian purples on the back have made this one of my artier quilts. 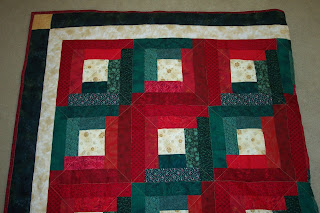 This Christmas Quilt was begun as a model for the Lawndale Christian Quilters. I finished it, intending to donate it to a fund raiser. Perhaps it will be used for a future donation/fund raiser. Its binding was part of a demonstration on binding. Notice the gold corners? Ran out of the green for the outer border and had to do some improvising. 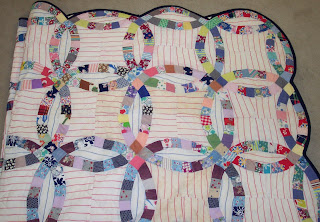 The scalloped edges on this quilt restoration for Laurel were something I've been putting off. I usually don't work with bias bindings and haven't done scalloped edges before. Reading directions and practicing are two things I prefer not to do. But I finally did tackle this project, and it wasn't that difficult. This quilt top is a Double Wedding Ring. Most are done on white backgrounds. It's rare to see a pastel or colored background. And this one uses striped feed/flour sacks as its background. My conclusion is that the piecer of this top often had to "make do" with what was available. There's a lot of hand work in this quilt top. I used Warm N'Natural batting and a muslin backing. This once-flimsy top now has a sturdiness to it.

Now that my project list has become manageable, I'm devoting all efforts during the next two weeks to working on Greg and Dorothy's Jazz Bed Quilt.
Posted by Donna at 3:59 PM No comments: