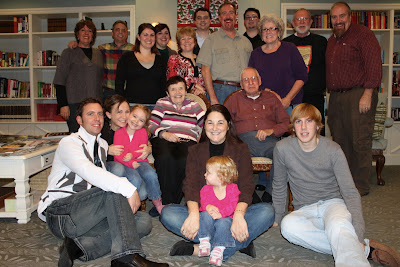 Courtesy of my brother Doug, here are most of the Whites at Mom and Dad's - Autumn Green, 67th and Cicero, in Chicago. Missing from this picture are niece Jennifer (in Florida with her husband), niece Candace (in the bathroom), and grand-niece Elle (sleeping). Brother Al made Skyline Chili, sister Paula brought a sandwich platter, brother Doug had various goodies, John brought all the fixin's for the chili, and Mom and Dad provided the pies. Lovely day - a luxury to be with family. We are blessed. On a negative note, the Vicodin I'm taking for knee pain and rehab seems to heighten the senses, especially hearing. My dad's accordion music is lovely, but my brother took this shot when I had obviously had enough. On a positive note, I've been up in my studio a couple of times. While doing the stairs is manageable, using the foot pedal of the sewing machine isn't - just yet. 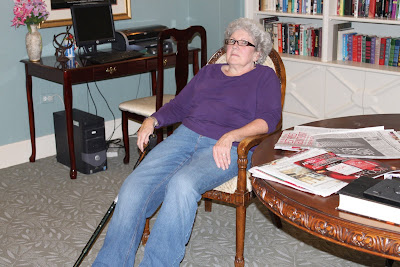 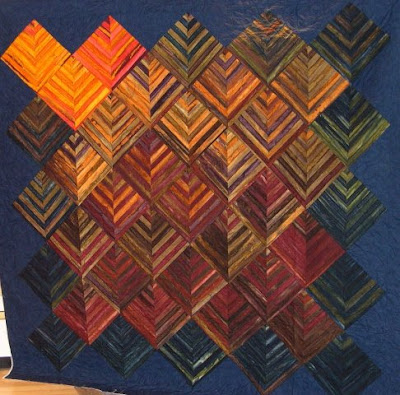 Now that I'm in the recuperative part of the total right knee replacement, I know I won't be getting up to the studio for 10 - 14 days or so. Since I can't quilt, this break gives me an opportunity to plan the projects I really want to do in the next few months and then priortize these projects. The first two are both pieces of wall art, a bright tumbling blocks with a back background for Kim and Tim Gibbons wedding and a Mariner's Compass in teals, blues, and purples for Janet Sylkaitis's 60th birthday. Of course more quilted totes. I mean, of course! There is a pile of fabrics that I want to use for Mors bags. And then there are projects like the one pictured here (courtesy of quiltfabric.com). I like the drama of the on-point setting as well as the color range. Perhaps this down time won't be so bad after all!

The Elves Have Left the Building! 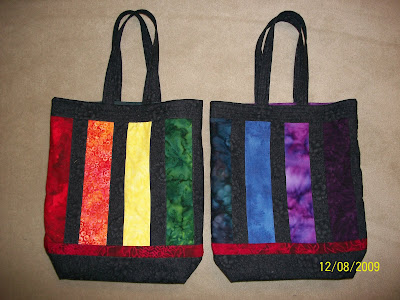 The big push is over. These three bags are completed. Lynita is purchasing 2 of them, the nicely organized vertical stripes. The scrap tote is for my surgeon's wife - someone who knows her Bible and will appreciate the spirit behind this Amazing Technicolor Dream Tote. I have a couple of projects laid out and ready to go as soon as I can get back to the studio. Of course I wanted to make another 20 or 30 various Christmas gifts - maybe they can be gifts for Dr. Martin Luther King, Jr.'s Day!

Kevin died in his sleep 6 months ago when he was 31. His family - his mother, his father, his brothers, his niece, his nephew - is grieving. This first year of missing Kevin is painful. The family has gone through a Thanksgiving without him as well as what would have been Kevin's 32nd birthday. Now this anguished family faces their first Christmas without him.

Kevin's mother Lynita is a woman I did a quilt for over 5 years ago. Before I did her wall quilt, she had just seen a t-shirt quilt that I completed. So now, years later, our paths are crossed, under the saddest of circumstances. She gave me Kevin's clothes and suggested wall hangings for her family. Her son Adam and Lynita spent an hour with me in the studio, articulating which shirts/pieces should go in which quilt and what colors/fabrics I could use as sashing and borders.

Adam and his brother David both have wall hangings that are 35" x 60." 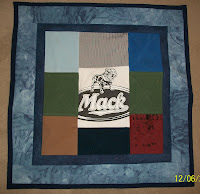 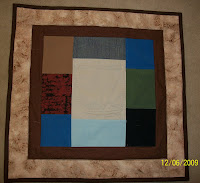 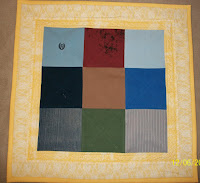 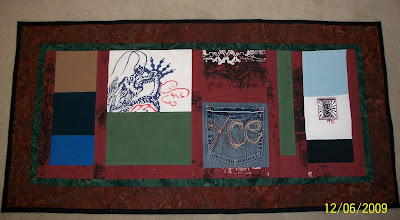 Grieving is a process that lasts a lifetime. And there are so many paths to grief recovery. I admire Lynita for helping her family identify a way that they can not only grieve for Kevin's death but also for helping her family - and herself - find a way to commemorate Kevin's life. Kevin will be present Christmas Day.
Posted by Donna at 7:04 PM 1 comment: 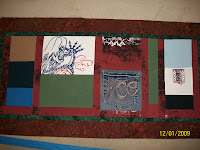 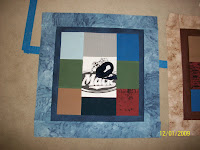 The current project of 6 wall hangings is coming together nicely. 3 of the pieces are horizontal wall hangings about 3' x 5'. And 3 of the pieces are 2' x 2' wall hangings. The quilting has begun, and I think I'll complete them by early next week. Then I'm shutting the studio down for a month while I have a total knee replacement. I'll miss the sewing, but I'm thrilled with the thought of a new body part!
Posted by Donna at 7:20 AM 1 comment: