I love what I am doing in the Studio, but I think I need to be doing some teaching as well. The Lawndale Ladies are fun and rewarding, but it's not enough. So I am going to see if I can teach the reversible technique at quiltfabric.com in Willowbrook and SusanMarie's at 135th and Ridgeland. There must be a model to hang in each store as an example of the technique. I did recently complete one in those lovely greys and ethnic fabrics, but it's bigger than what I propose to teach. So I stole the combination of batik fabrics that Cristina used for her aunt's Barcelona quilt on one side and the other side has fabrics that all have gold in them. The result is stunning. Now I need to make a second one, and I think it will have to copy this one. I'm learning so much by doing this technique again and again and am eager to teach it.

Cristina left for Barcelona earlier this week. Before she left she came over with an envelope. It was $100 gift certificate from quiltfabric.com from the entire family. Woo Hoo! I know I'll spend it all on more batiks. I am already missing Cristina - can't imagine what her parents are feeling.
Posted by Donna at 8:24 AM No comments:

The Quilt for Myrtle Beach

Mani's quilt is complete. It's very simple in design but has more quilting than I normally put in a quilt. I'll give it to her on Dodie's 58th birthday, July 13, which is the day of of her ash-letting-go ceremony. Virginia has her quilt. I haven't made a quilt for Paul, Mani's brother and Virginia's twin. Someday... Making this quilt has been peaceful. Sad but peaceful. I think that's what the week at the beach will be - sad but peaceful. It was almost a year ago when Dodie and I did her "important" work, writing down what she wanted to have happen after her death. Scattering the ashes at the Turner House on Pawley's Island was part of the plan. I didn't get it at the time, but I get it now: this was her way of getting us all together to celebrate her life - and death.
Posted by Donna at 9:47 PM No comments:

Cristina - in the old and the new studio 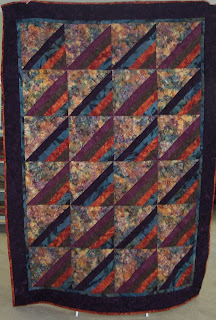 I have a 16 year-old friend. Just as I have difficulty telling my peers about my friend Cristina, she has an equally hard time telling her peers about her 57 year-old friend. Cristina is my neighbor, and she has spent more time in my studio than anyone else. She began making quilts with me when she was in junior high. The quilt she just finished today is her fifth (or sixth) one. Last year she made a quilt for her grandmother in Uruguay. Today she finished a quilt for her aunt in Barcelona which Cristina herself is going to deliver next week. While in Barcelona Cris will have an opportunity to study at an art school. I can't wait to see what she'll be learning!

I'm impressed with Cristina because she has such an interesting eye for design and color. Because of her I have become more adventurous in some of my fabric combinations. When I am stuck for a border or need some input, she's the first one I'll ask. Just recently she introduced me to HTML code as well as some interesting music groups (Coldplay, The Shins, The Cranberries, and Postal Service). My latest reversible quilt uses the same fabrics from her Barcelona quilt. Yes, I copied from her.

My new studio was completed in late December, 2006. My old studio was dismantled in August, 2006. From August until December I was able to work out of a temporary studio at Cristina's parents' home. Although Ana and Miguel were more than gracious about this arrangement, it was Cristina who initiated the idea, both to me and her parents. I was reluctant and thought I could work out of the first floor of our home. John knew that I couldn't and told me from the very first to accept Cristina's suggestion. And so I did, at Ana's urging. In retrospect, I don't know what I would have done without the temporary studio down the block.

At this same time Cristina received her driver's permit and was taking Driver Education. Getting her 50 hours of behind-the-wheel time was difficult. That's when my Quiltmobile and I stepped in. During this past winter we accumulated driving hours after school and on weekends. Our time often included a precious stop at Starbuck's. I am proud to say that Cristina now knows all the local Starbucks, including the drive-thru one in Lyons! But I'm even happier to report that Cristina earned her driver's license this spring and now tools around happily and independently.

We are lucky that our friendship has been beneficial for both of us.

So my friend Cristina is off to Barcelona for the summer. I'm excited for her and can't wait to begin hearing tales of how she is doing and what she is doing.
Posted by Donna at 12:52 PM No comments:

Dodie's been dead for 6 months now. How odd to type that sentence. I think about her daily, sad that she is no longer part of the party of life and so thankful that I still am. In July we're going to Myrtle Beach where her family vacations every summer. This summer will be no different, except that on Dodie's birth date, July 13, Furman is hosting an "ash-letting-go" ceremony. Back in January I made a quilt for Dodie's younger daughter Virginia. Now I'm getting ready to work on a quilt for her older daughter Mani.

I know what I want the look of the quilt to be - light, airy, beachy, summery. In Beijing I wanted to buy fabrics, and the plentiful silks weren't what I wanted. I did buy some shirting cottons, which will be perfect for this project. Also, years ago Dodie gave me some of Furman's old shirts and was thinking of a quilt. It was one of our "someday" projects that we never got to. This simple linear pattern will be perfect for these light blues and whites.

I'm looking forward to Myrtle Beach. It's where Dodie and I spent a week with her kids when Furman couldn't get away from the hospital, and it's where John and I honeymooned 25 years ago. Virginia and Furman's sisters will be there, and they are charming women. And Mani has found gracious digs for us for that week. Most of all, I think this ceremony for Dodie will be an additional closure that I need.
Posted by Donna at 7:44 AM No comments: 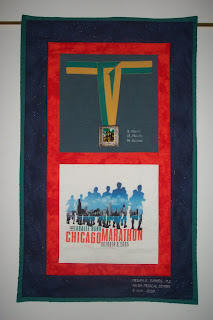 Good friend Cecilia's daughter is graduating from med school today. Megan has also provided the family with the first grandchild AND she even ran the Chicago marathon two years ago. Meg is a charming young woman. In honor of her graduation her parents are hosting a cocktail reception tonight for her. At my request, Megan gave me her Chicago marathon T-shirt and her medal (she came in 28,115th place and ran it in 5:17:14!). Look at the result - it's great! Megan plans on hanging this in her office when she begins her practice in rehab medicine. Until then, it will live in the same room with all of her husband's ironman trophies. Dr. Steve may have more trophies, but Dr. Megan's is certainly prettier.

I think this is going to be the summer that I am finally going to work on one of the three landscapes that have been rattling around in my head. It started with our first visit to Alaska and seeing the fabulous sunsets and scenery of the Inner Passage. Wanting to do a landscape quilt continued the summer we drove up to Minneapolis-St. Paul. Part of our drive was along the Mississippi on the Wisconsin-Minnesota border - the Mississippi River and the bluffs are just beautiful. The final scene is a recent one: our trip to China, the Yangtze River, and the three Gorges dam. Ok, ok, we didn't see the river and the dam. But friend Kaberi did. In fact, this photo is hers. She and her husband are traveling the world, and they took a trip from Beijing along the Yangtze - something in hindsight we probably should have done. Their blog is well worth reading - the writing and the photos are excellent.

I see no reason why I can't combine the best of these three scapes into something fabulous. We'll see...
Posted by Donna at 8:00 AM No comments: 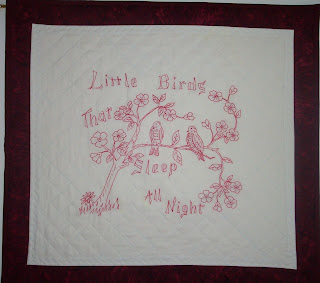 Friend Laurel found this piece of Redwork at a flea market several years ago and recently asked if I would turn it into a wall hanging. Despite some minor yellowing and general frailty, this piece of needlework looks great with its new border and some cross-hatch quilting. I think it will be good for another 50 years. Laurel is going to sell this at the "Day in the Country" market in Oak Brook July 1. It will be interesting to see how this sells; Laurel has some additional redwork pieces in her treasure chest!

It's satisfying to restore an older piece. All aspect of quilting - preparation, cutting, piecing, basting, marking, quilting, and binding - are things I need to do on a daily basis. To have a reason to do any of them, like for this piece, is even more satisfying.
Posted by Donna at 7:42 PM No comments:


I'm happiest when I have several projects going at the same time, especially now that I have room to spread out. I've been enjoying this reversible project. It's a bit time consuming, but the payoff is that there is no pin-basting or quilting to do at the end because this is a quilt-as-you-go technique. This is the upper third of the quilt, and the back of it is all these fabulous grays.

I love it and am hot to finish it. Then I can work on a Jazz quilt for friends Greg and Dorothy, a wall hanging from a piece of redwork for Laurel, the Christmas Log Cabin that is part of the Lawndale Christian Quilters demo, Cecilia's Bed Quilt, and Rachel's Wall Hanging.