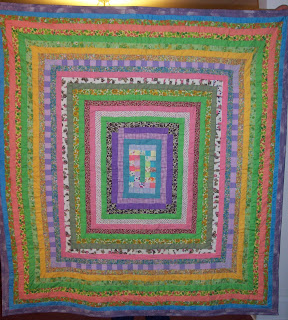 I began quilting in 1985. There was a Women's Day magazine article by Eleanor Burns about making a quilt in a day (see www.quiltinaday.com). But I've always known how to sew. In fact, I took a sewing machine to Milligan with me in 1967. Sewing was a bit second nature because of my mom. In fact, my mom's 1948 Singer Featherweight is all packed and ready to go to my Lawndale workshop tomorrow evening.

I have vague recollections of my grandmother Eloise White quilting. They are similar to the ones I have of my great-grandmother Mary Merganthaler Sheehan crocheting a tablecloth. Perhaps it was 1955 when I accompanied Grandma Eloise to town (North Judson, Indiana) to get some fabric for a quilt she was working on. More tangible is the quilt I have of hers. It's pieced and quilted by hand, and the batting is visibly smaller than the quilt. How could she have put all that time into a quilt and then skimp on the batting? The answer I'm making up is that she simply wanted to get it done and move on to something else, and getting proper-sized batting would have slowed her down.

In January 2007 my parents came from lunch, and my mom had this quilt-top with her. It's a Postage Stamp quilt (all pieces are 1.5" squares), and all hand-pieced. It had been handled so many times that the edges were all lettuce-y. Many of the seams, especially on the outer 3 rounds, had been quickly and carelessly pieced. And every time someone handled it, seams had come undone. My mom and I both concluded that this was an unfinished quilt of my grandmother's.

Earlier this week my aunt Elizabeth White, the widow of my dad's younger brother, my Uncle Leonard, was in town with my cousin Jerry White and his family. My parents were also here for lunch. And of course I had to show Grandma Eloise's quilt. And you know what? My mom and my aunt both agreed it wasn't Eloise's quilt - it was my aunt Jean White Gill's unfinished quilt. Turns out my dad brought it back with him from Everett, Washington, after her death in 1995.

My aunt Jean was my mom's age. She was someone who doted on me and did special things with me when I was a child. We took a motor trip together in 1962, driving through the Smoky Mountains and to Washington, DC. When she and her husband moved to Alaska in the 70's, several of my White cousins - John, Jerry, and Jim - spent their summers there. She was quite the character.

I've always said quilting connects me with an American tradition and an American sisterhood. Quilting now deepens my connection to my grandmother and my aunt. I know why I quilt, and I bet they quilted for some of the same reasons. Quilters talk about their UFO's (unfinished objects). What a pleasure to finish my aunt's quilt.
Posted by Donna at 8:29 PM 1 comment: 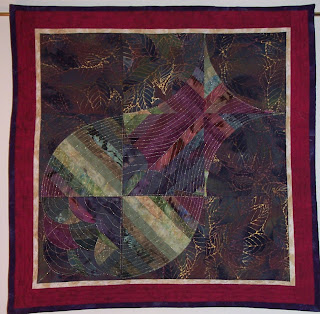 Inspiration has a multitude of sources. Sometimes a particular piece of fabric becomes the source of inspiration. And it could be a combination of fabrics or colors. Sometimes it's a design. I still have a landscape/sunset quilt trying to get out of my head from our trips to Alaska. The same is true of our drive along the Mississippi Valley on our way to Minneapolis. Sometimes a special occasion coincides with a technique I want to try. That's what happened with niece Leslie's high school graduation quilt. This quilt is from the leftovers of Leslie's quilt. And some quilts have no inspiration - they are just something that must be done.

John and I just returned from a fabulous and intense short week in Beijing. Our lovely guide Hua Jing showed us stuff until our brains were full. And I come home with Asian motifs running through my head. Kennedy teacher/friend Rachel is someone who has been on my quilt list. Rachel is dedicated and personable, and we spent much time together working on various projects. She bought her first place in Oak Park and has some dining room wall space that she's saving for me. I've been bouncing various ideas off of her, but when I got back from Beijing I knew what I wanted to do. The palette is a warm one - neutrals, browns, sage greens, true reds, some golds. There are 6 blocks, each with an "Asian" motif and simple lines.

Yesterday I was in a work groove when John reminded me that I'm making a Jazz T-Shirt Quilt for the Brookfield Jazz Society. And that reminded me that I'm taking the t-shirt John bought at The Great Wall and turning that into a wall hanging. There is also a pile of red/cranberries/burgundies in the studio for niece Ali's quilt - she graduated in December from Richards HS but I figure I still have until May for completion. I think I want to use the same technique for her quilt that I used for Leslie's, which involved making my own fabric from strips of fabrics.

So today I will head up and continue to work on Rachel's quilt. When I hit a rough patch, then I'll begin squaring up t-shirts. Then I'll think about John's Great Wall Wall Hanging and what fabrics to incorporate into that. And then I'll look at the some of the ethnic fabrics and dream about how I want to use them. I may even look at the pile of scraps I had my grandson sort - I want to try a weaving technique in an attempt to create a checkered fabric. The freedom to work on various projects simutaneously and to have the space to do this is fabulous.
Posted by Donna at 9:57 PM 1 comment:

Made Possible by a Grant From.... 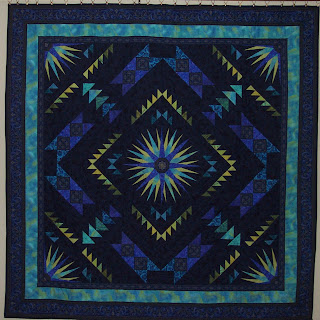 My productivity level can be pretty high at times. It's amazing what one can do when devoting 6 to 8 hours a day on one project. But here's the real secret to my productivity: my husband John.

I don't do housework. I don't shop. I don't pay the bills. I don't do the laundry. I do cook but not often. This household pattern began when John retired in 1993 (ok, it probably even started before John retired). And it continues. Any quilt I give is as much from John as it is from me. Any workshop I do is possible because John even helps me load my car. Any commission I complete is because John carries the workload of the house.

Here's a great example: in running off copies of directions for my current workshop Blocks from the Underground Railroad at the Lawndale Christian Church, I not only ran through all of our white paper but even used all of our pastel paper as well. John needed to make copies for something he's doing for the Brookfield Jazz Society. When he saw there was no paper, he cheerfully announced he needed to stop at Office Max for paper on the way home from visiting his father in the hospital and doing the weekly shopping.

I love that John loves the studio as much as I do. I catch him going upstairs just to check things out. He painted the ceiling and all the trim, he configured and installed the closet hardware, he hung the full-length mirror. He finished the trim on the CD shelves and then painted them so that I could finally get all my CD's out of storage. I couldn't figure out what to do with some of the things I wanted to hang like my Imari needlepoint, the Seurat print, and a Baltimore Album quilt print from my sister. He not only figured out where to hang them, he then did it! Even the fabulous color of the walls (Koala Bear from Home Depot) was his idea - I would have gone much mintier if left to my own devices and that would have been so wrong) is something I must give him credit for.

John's devotion to all things jazz and NFL equals mine to quilting. My goal is to be as supportive of his interests as he is to mine. In May we are celebrating our 25th Wedding Anniversary. I love John. A lot. I'm a lucky girl.
Posted by Donna at 9:28 AM No comments: 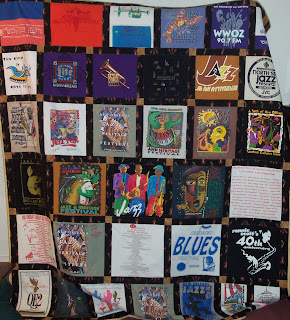 My husband John, aka Mr. Jazz, has friends all over the states. And he is one of my best salesmen! George from Colorado mailed me all of his jazz t-shirts, and I did two wall hangings for him. George was very sick when he ordered his quilts and took great joy in them before he died. Mike from New Orleans lost everything, including his father, in Hurricane Katrina. We could not begin to imagine their loss. When Mike and Eloise relocated in Richmond, Virginia, I sent them a Jeweled Trip Around the World. Betty Jane is also from New Orleans and a lifelong friend of Mike's. Betty Jane rebuilt and is still in NO. We hooked up with BJ before a jazz cruise in December 2006. And that's when we hatched "the plan." She has always wanted a bedspread of her jazz t-shirts. And as she was looking through her shirts, she realized she had some of Mike's (remember, Mike lost everything...). So she mailed me all of her shirts and Mike's. Along with the shirts BJ also packed a King's Cake and some 2007 Mardi Gras Beads from the Zulu Social Aid & Pleasure Club - she was a Zulu Princess in the Parade! And then I got busy working on BJ's Jazzy Bed Quilt and Mike's Jazz Wall Hanging. My studio floor became a mosaic of quilts.

Both went in the mail last week. Yesterday BJ called, ecstatic over her quilt. Today Mike called, amazed and pleased with his. This is why I quilt. 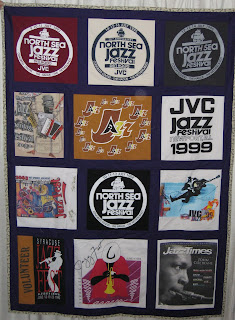 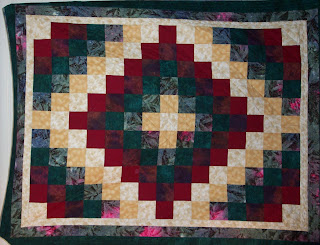