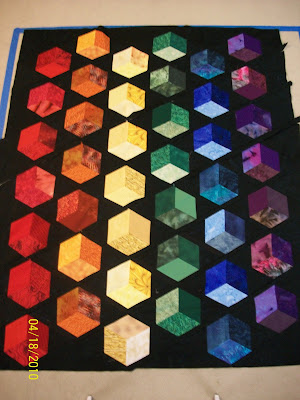 Two of my grandsons, Sam and Jack, are color-blind. So is Tim Gibbons, my cousin Dennis and Linda's son. This Tumbing Blocks of Many Colors is in celebration of Tim's marriage to Kim a year ago. When Tim and Kim were choosing the color and design for their quilt, Tim's ability to discern lights, mediums, and darks became a key factor. There's a neat 3-D effect which I think Tim will be able to see. Tim and Kim are expecting their first child in September - perhaps Kim can use the quilt as a way to teach their child the colors of the spectrum!

I'm temporarily shutting down the studio - again - while I have my other knee replaced. My goal was to get this quilt top pieced together. There were originally over 150 individual pieces for this quilt - now it's in 3 big sections. My new goal is to have this quilt delivered before Kim delivers! 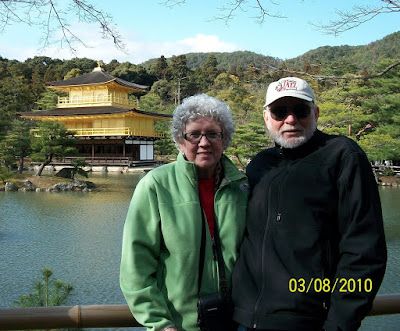 It's fabulous to see what you want to see and to see it on a clear day. That's what happened with our day in Kyoto and our visit to the Golden Pavillion. The trick of this picture was to keep the hundreds of other tourists out of the picture (thanks to the miracle of photo editing/cropping). The color and the lines of this temple are so pleasing to my eye. On a silly note we were in Tianjin, China, on St Patrick's Day, and John brought along some green food coloring so that he could celebrate properly. 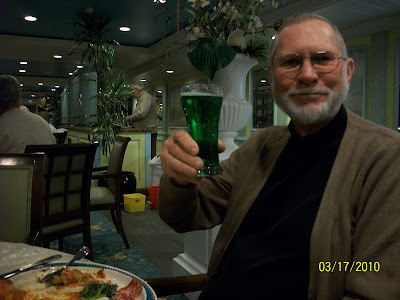 A Temple and From the Wall 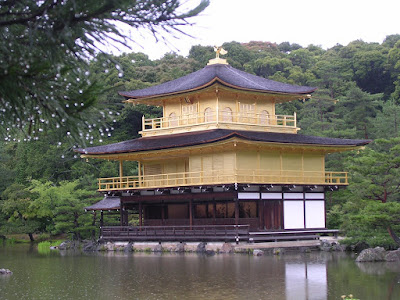 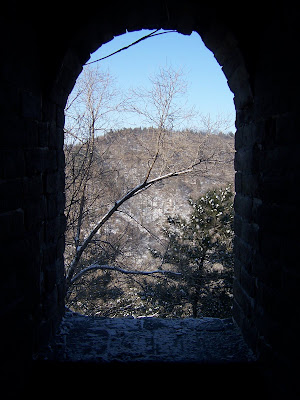 Being in Asia will have an influence on my quilting. Two landscape quilts that are in my head involve this beautiful golden temple in Kyoto, Japan, and the Great Wall of China. This golden pavillion is the reason I went to Kyoto. Isn't it beautiful? This picture taken from the Great Wall was shot by my niece Jen. 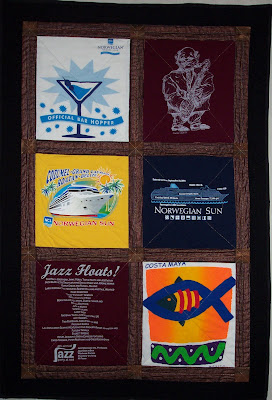 Our Southeast Asia cruise is now in the past. We started in Tokyo and sailed to Vladivostok and Beijing before hitting the "Southeast" places. Fascinating people and places. In addition to Tokyo, we were in Osaka, Hiroshima, Hakata, and Okinawa. There was the one stop in Russia, where our ship had to break ice to get into the harbor. The sailing to and from Vladivostok was very very rough - something John and I tolerate well. We then went to Inchon, Korea and visited Seoul for a day. The Chinese ports included Beijing, Dalian, Shanghai, and Hong Kong. We did two ports in Viet Nam and two in Thailand (Bangkok and Koh Sumui), and the trip concluded in Singapore, which was hot and steamy.

We were amazed by how vertical so many of the cities are, what enormous populations the cities have (it's like Chicago is this small hick town), how friendly all people are, and how constantly present and aggressive souvenir sales people were. In Vung Tau, a rural area close to the Mekong Delta, we made five stops, and there was a fleet of salespeople that followed our bus on their motorcycles. It was a good trip, but I'm thrilled to be home. There's nothing like a tiny cruise ship room and bathroom to make me realize how palatial our house is!

This t-shirt quilt has nothing to do with this cruise but has a lot to do with John's frequent jazz cruises. The t-shirts in this picture were collected by Gwen Jobes, a woman John has known for over 10 years. She and her husband Winnie go on the same "Jazz Party at Sea" cruise that John does every year. Five years ago she sent me 3 t-shirts, and I used both the fronts and the backs for this wall hanging that she gave her husband for Christmas. 30" x 42"