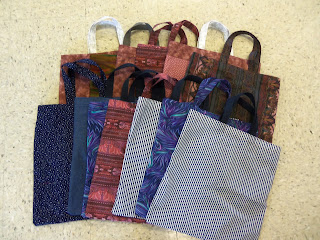 The Chicago Modern Quilt Guild's Fall Retreat at the Siena Center in Racine, WI was just perfect - a lovely and small group and ideal weather.  Our work room overlooking Lake Michigan saw so much production.  The first half of the retreat I worked on Morsbags for the September charity Sew-In my guild is hosting - I won't be there and wanted to get my bags done.  Organizers Erika and Holly announced a competition to see who makes the most bags.  I don't even know what the prize is, but that old competitive nature just kicks in... 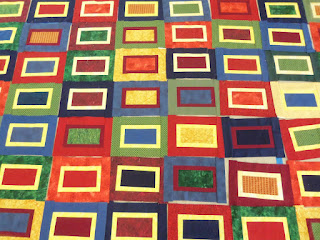 The other project I worked on is a quilt for 8th grade grandson Brandon, who has moved from a twin to a full bed. He originally asked if I could enlarge the quilt he made a couple of years ago. When I suggested a new quilt, he asked if he would have to make it. When I assured him I would indeed make it, he of course agreed. These colors are bright and manly - I think he'll be happy to use this through his high school years! Want to know more about the retreat? Hop on over to the Chicago Modern Quilt Guild blog - pictures should be up in a day or two!
Posted by Donna at 9:56 AM

I sure picked the wrong retreat to miss! Lots of bonding fun & vodka gummy bears & whooping cough!
Have a safe & fun trip.

I love that your grandson liked his first quilt so much, that he just wanted you to add to it. A truly appreciated gift, and I'm sure he will love his new quilt as well.