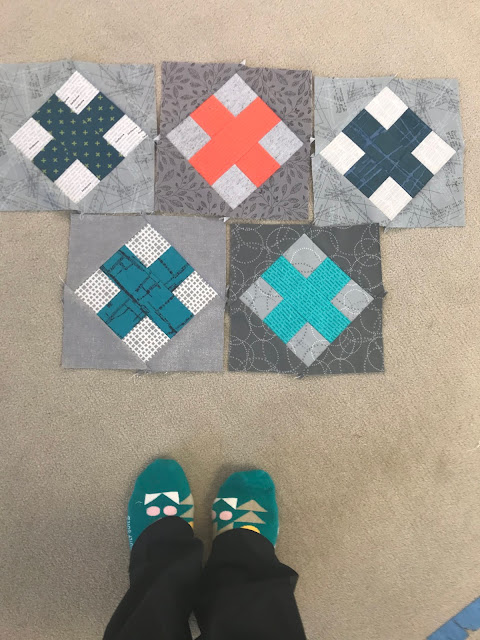 I define myself, especially since my retirement from teaching in 2005, as a quilter, a sewist, a sewer.  Sewing is what I do.  Sewing is why we used the entire upstairs space as my studio.  This is where I work daily.  Daily.  DAILY.

For 2 weeks after the February 18 surgery, I had to wear leg pumps full time for two weeks (it's for the blood-clotting disorder I have).  That meant house-lockdown.  In early March I started Occupational Therapy 3 times a week.  I learned I could drive one-handed and would hit the local grocery in the same strip mall as my therapy.  I still couldn't cook, but we did have our grandsons over for dinner on March 17.  And then Illinois went on lockdown March 21.

This sheltering-in-place has not been about the virus for me.  It's been about my wrist and my inability to use two hands.  Having to shelter in my home is a quilter's dream come true - if she can sew.  But I did learn that I could do minor sewing, thanks to a machine with a knee-life and automatic scissors.  One of the first things I did were these kiss blocks a guild sister was collecting for a charity project.  How satisfying to make something!  I also learned I couldn't hand-quilt.  I kept picking up the project only to discover that it just hurt too much.


Being in the studio allows John to do what he wants and explore his music.  When I'm on the first floor, that doesn't happen.   My being in the studio restores balance to the house.  And it's only recently that I've been here for more than an hour or two and that I can hand-quilt for an hour or so.

Someone suggested to me in early March that this might be a good time to explore things I might do instead of sewing.  Uh, no.  Just no.  There may be a point when I can't sew.  I talked with a dear cousin of John's who has lost her ability to do handwork because of Parkinson's.  I'm sad for her - she too is sad but has come to grips with its. Putting eggs into one basket is danger, but...that's what I do.

Daily I am able to do more - in the kitchen, in the studio, in the bathroom.  Even blogging and using two hands? ah.......   slouching towards normalcy.
Posted by Donna at 9:49 AM