February - A Celebration of Black History 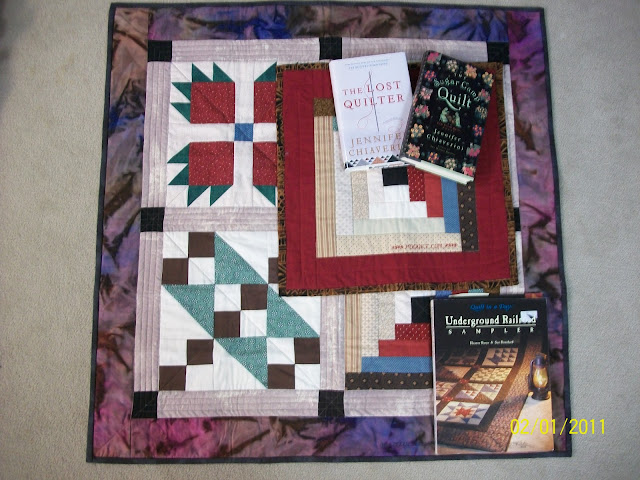 Quilting, a distinctly American art form, and Black History are intertwined. Quilting reflects what is/was happening in society. Some of the best known quilt blocks, like the Log Cabin and the Bear's Paw, were used as messages for the Underground Railway. A Log Cabin quilt on a clothes line meant that up ahead there was a safe house. A Bear's Paw quilt was a sign to follow the path of the bears for a route through the mountains. Just as the hymn "Wade In The Water" meant to abandon the path and walk in or near the water, a Monkey's Wrench quilt meant it was time to collect tools that would be needed on the journey to freedom.

Jennifer Chiaverini, author of the Elm Creek Quilt books, explores the theme of quilts, the Underground Railway, and the anti-abolitionist movement in her books
The Sugar Camp Quilt, The Lost Quilter and The Runaway Quilt. One character, a cantankerous old man, was actually a gentle man with a soft heart who needed to play the cranky horrible old man in order to hide his role in the Underground Railroad.

A few years ago a small handful of women from the Lawndale Christian Church began quilting, and we worked on a sampler of blocks from Eleanor Burns's book The Underground Railroad Sampler. This sampler included the Log Cabin, Jacob's Ladder, Bear's Paw, and Monkey Wrench. It was a great project because it reinforced skills with sashing, borders, and binding as well as serving a connection to our pasts.

A rich tradition in quilting is the story quilt. Instead of a blocked, pieced quilt, a story quilt is often applique, heavily detailed, and literally tells a story. At the other end of the quilting spectrum is the community of quilters from Quilters of Gee's Bend. They captivated the quilting and artistic world with their primitive and graphic quilts. February is always a good month to reflect on the rich history of American quilting. I think I'll honor this month with a liberated scrap quilt.
Posted by Donna at 9:20 PM

Perfect February post. I got to see a Gee's Bend quilt exhibit a couple of years ago. It was great seeing them in person.
quiltfever.wordpress.com